Like the other skippers of Open 60 monohulls, the American sailor Bruce Schwab has done his inversion test for his new Ocean Planet. An important moment for the skipper :

Bruce Schwab : "The test went well, it just took a bit longer than I expected. After being inverted, I opened the deck air vents for the starboard water ballast tank (usually used to let the air OUT) to let the tank start to fill. It filled some and I also started to pump water in with a manual pump that is set up for filling the ballast tanks while upside down.

I pumped for quite a while, about 45 minutes or so, before I realized that the water I was pumping into the tank was just draining out of the air (now water) vents. After closing them I made much better headway. 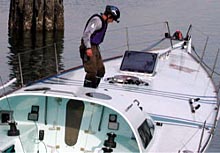 However, the pump is small and the tank very large... It seemed like about 500,000 pump strokes before we were getting close. I wanted to hurry since the companionway hatch was leaking just a little... enough to get kinda deep in the sump, er, coachroof... Every so often I would go up to the sail locker and walk back and forth across the floor, er, cabintop, to get the boat rocking and see if she would go. When she didn’t it was back to the pumping, this went back and forth a few times. Finally, with the ballast tank about 1/3 full, I got her rocking enough to go over.