Hempel World Cup Series Enoshima : Three in a row for Belcher and Ryan 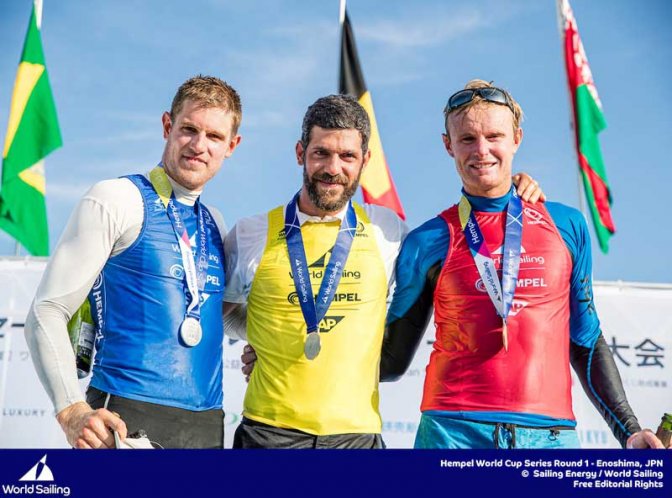 Australia’s Mat Belcher and Will Ryan won their third consecutive Men’s 470 gold medal on the Tokyo 2020 Olympic waters as the Hempel World Cup Series Enoshima event in Japan concluded. Belcher and Ryan won the 470 World Championship title on 9 August and followed up with Ready Steady Tokyo, the Olympic test event, success on 22 August.

After five weeks of hard racing in Enoshima, they will head home, take stock of their success during a period of rest and move into 2020, the Olympic year, full of confidence.

The Men’s 470 Medal Race was one of two that was completed on a light wind final day on Sagami Bay. The Women’s 470 sailed the second and Spain’s Silvia Mas and Patricia Cantero came from behind to grab gold.

Light winds saw the postponement of the Laser, Laser Radial and Finn Medal Races which meant the results overnight stand. Nicholas Heiner (NED) and Pavlos Kontides (CYP) had already confirmed gold before the Medal Race in the Finn and Laser.

Emma Plasschaert (BEL) was prepared to fight Anne-Marie Rindom (DEN) and Alison Young (GBR) for gold in the Laser Radial. The cancellation confirmed Plasschaert as victor in Enoshima for the second time in ten days after she won Ready Steady Tokyo.

Belcher and Ryan started the day 16 points clear of Jordi Xammar and Nicolas Rodriguez (ESP) and kept themselves out of trouble in the Medal Race to record Record #sailingrecord a fifth place which confirmed gold.

On the week, Belcher commented, “It was a great experience and today was a nice way to finish off five weeks in Japan. It’s been great. We’ve been ticking off a few things to prepare the best we can on the Olympic waters.

“It took us a while to get everything organised. Obviously we got into good shape so we have to thank our coach and support staff but it gives us a bit of confidence for next year. There’s a lot of work to do and I have no doubt all the teams will train extremely hard through to next year.”

As for what’s next, Belcher continued, “We’re going to have a break. We’re privileged to be working with the Japanese teams and we hope we can continue that coming into next year.

“Hopefully we’ll be in Miami for the World Cup. It’s not much of a break. Our World Championships follow in March and before you know it we’re counting down to the Games. The next time we’ll come back here will be next year. We’ll be working on different parts of our campaign.

“It’s been a privilege to spend two months here. It’s put us in a nice position but that’s the same for all the 470 sailors so hopefully we can remember what we’ve learnt and put it into action in nine months’ time at Tokyo 2020.”

Xammar and Rodriguez finished second in the Medal Race and picked up silver, their third podium finish after successes at the World Championships and Ready Steady Tokyo.

Japan’s Kazuto Doi and Naoya Kimura fended off a charge from Sweden’s Anton Dahlberg and Fredrik Bergström to complete the podium.

Spain’s Silvia Mas and Patricia Cantero waited until the final downwind before they pounced to claim gold in the Women’s 470.

Nia Jerwood and Monique de Vries (AUS) held the overnight lead on 33 points and were followed by Mas and Cantero on 36 with Elena Berta and Bianca Caruso (ITA) in third on 41.

The Australians had gold in their hands throughout the entire race but on the last downwind, before the final mark and the reach to the finish, Mas and Cantero edged in front of Atlantic and Nora Brugman (USA). This put one boat in-between themselves and the Australians which was enough for them to overhaul them to clinch gold by a single point.

“I was nervous on the last downwind,” commented Cantero, “and then on the run to the finish I was calm because I knew it was done.”

Mas added, “We tried to have a clear start and go with as much speed to mark one as possible. We then tried to be near our rivals, the Italians and Australians, and then put a boat between them.”

The Australians were made to settle for silver. Meanwhile, Frederike Loewe and Anna Makrfort (GER) won the Medal Race and as Berta and Caruso finished ninth, the Germans moved up into the final podium position.

In the Finn, Heiner had sealed gold ahead of the Medal Race.

“It’s amazing to come away with the gold after an even more amazing week of sailing,” commented the Dutchman. “Enoshima really turned it up with some amazing conditions and it was good fun out there this week.”

The Laser Radial competition at the Olympic test event and the Hempel World Cup Series event was a high scoring affair which Belgium’s Plasschaert conquered on both occasions.

“I think it’s really exciting [to win two events in a row],” said Plasschaert. “I’m disappointed we didn’t get to sail the Medal Races. I would have loved the experience. But on the other hand I’m happy with two solid weeks of racing and I’m really looking forward to next year.”

The final race of the day to be cancelled was the Laser. Cyprus’ Kontides finished outside of the top nine just once and held an unassailable leading over Matt Wearn (AUS) heading into the Medal Race.

On the week, Kontides said, “I sailed consistently at the front and for the first time ever I have won a gold without needing to sail the Medal Race.

“I’m really happy that the season ended this way because it wasn’t the season I planned for. We’ve spent a lot of time in Japan and I am happy with the conclusions and data we’ve collected from Sagami Bay.

“It’s a really challenging place to sail and it will be helpful for our preparations to the big dream and goal – Tokyo 2020.”

As the Medal Race was cancelled, silver went to Wearn and Jean Baptiste Bernaz (FRA) picked up bronze.

The Hempel World Cup Series will head to Miami, USA in January 2020 as the countdown to the Tokyo 2020 Olympic Games continues. 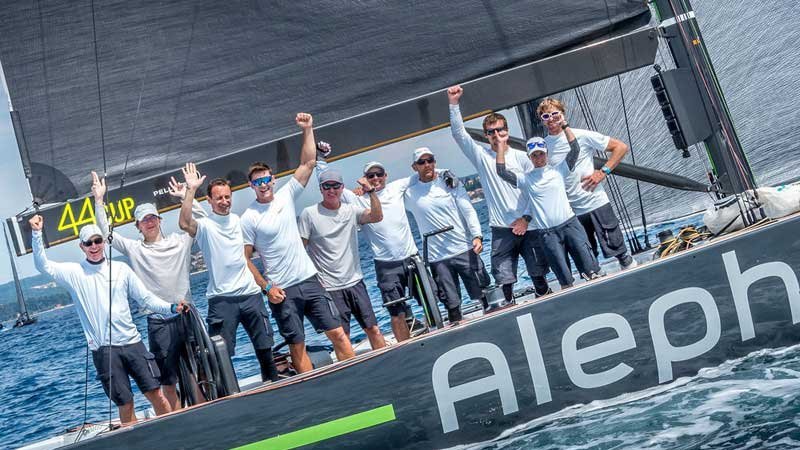 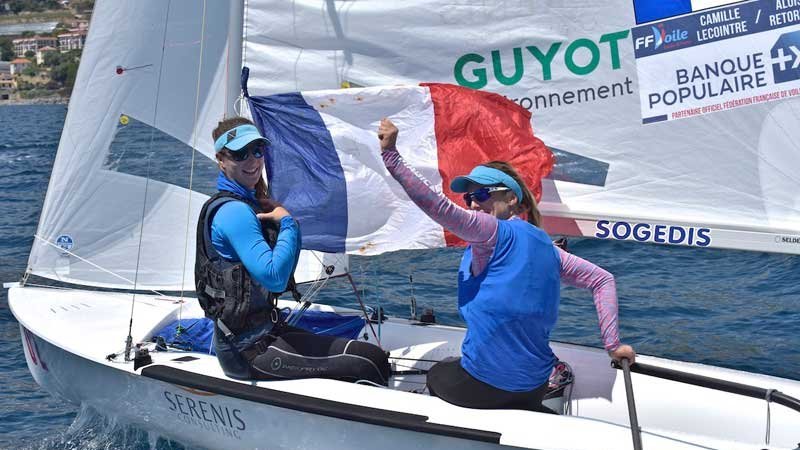 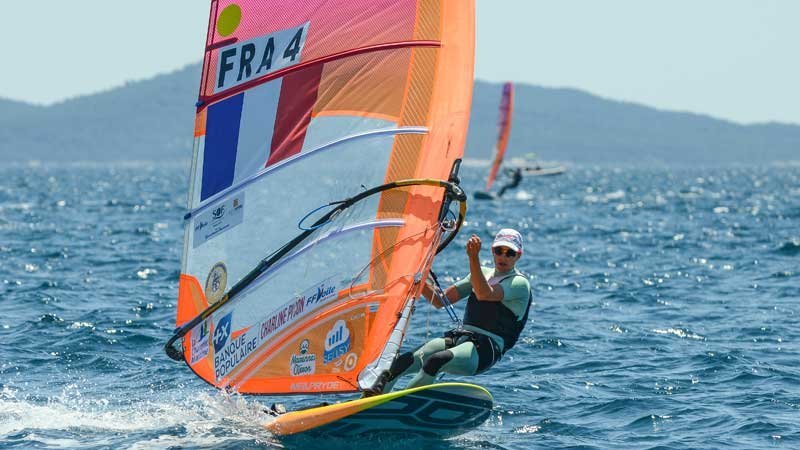 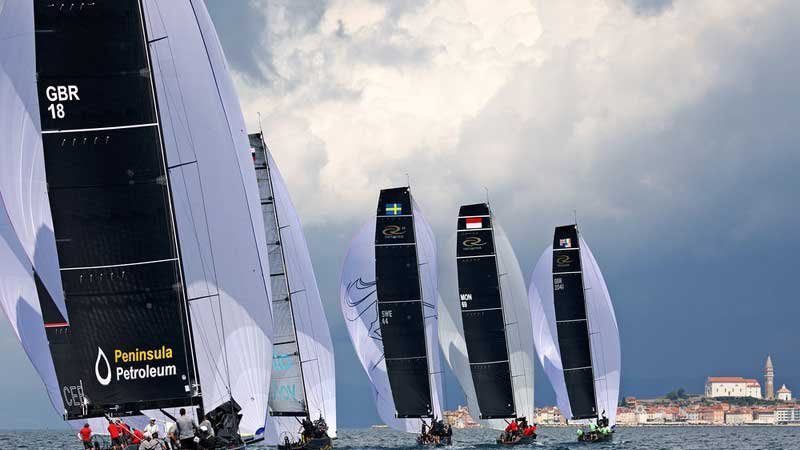