Francis Joyon : “The Horn and a very positive feeling” 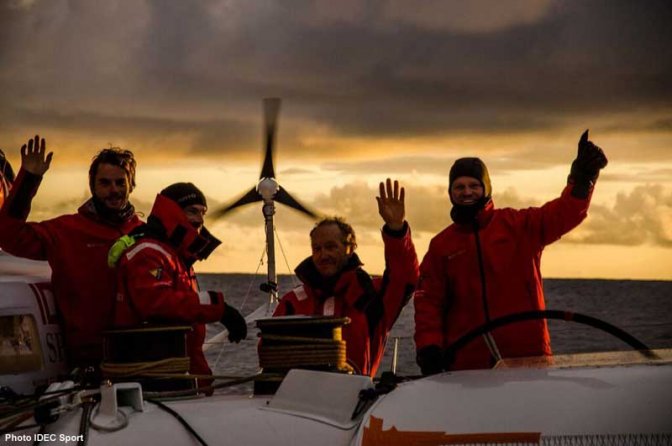 IDEC SPORT crossed the finishing line off Ushant at 1650hrs UTC on Friday 8th January. Francis Joyon and his crew of five took 47 days 14 hours and 47 minutes to sail around the world. This was the third best time in the history of the Jules Verne Trophy

They are back. The sun was going down over the Le Créac’h lighthouse and it was under fairly clear skies with a few clouds around that Ushant welcomed back the six men aboard IDEC SPORT. Francis Joyon, Alex Pella, Clément Surtel, Boris Herrmann, Gwénolé Gahinet and Bernard Stamm can hug each other, perform a high five and smile as they look forward to a great night ahead in the harbour in Brest Brest #brest . It is true they didn’t smash the Jules Verne Trophy record Record #sailingrecord , but they did manage to get the third best time ever sailing around the world. They improved on the boat’s own record Record #sailingrecord by 17 hours, with a crew of just six, while Franck Cammas had nine men with him when he won the Jules Verne Trophy on this boat back in 2010.

Above all, this adventure will be remembered for the human aspect. There were some great moments, like the record sprint towards the Equator in heavy weather and just one gybe to start the adventure. Then, there was the outright record set in the Indian Ocean, when they dived a long way south down into the ice with the men and boat freezing. They suffered in the Pacific, which was a bit too quiet and ended with a very strange and peaceful rounding of the Horn. They could all admire the sight of a giant iceberg right in the middle of the South Atlantic. They went all the way to the limit in some wild moments of surfing at 45 knots. They sailed fast. Very fast. They laughed a lot. They got to know each other and shared their dreams with each other and with us back on dry land. They enjoyed themselves and fought hard. They will shortly be welcomed home in the harbour in Brest Brest #brest , when the public will be able to thank them for al that. But now we let them speak for themselves…

Francis Joyon : “The Horn and a very positive feeling”

“There were a lot of great moments. I shall most remember a classic one : rounding Cape Horn in very pleasant conditions and in an incredible light… But the most important thing was the pleasure of being with a crew. We really worked well together and got on well. Our skills were fairly complementary. There were several solo sailors in this crew and that made a good mixture. We really worked hard on the boat, for example last night. I may sound a bit tired, but it’s true we didn’t get much rest, as we carried out manoeuvres through the night in squalls, but there was a good atmosphere and we all enjoyed it. At one point during the night, Bernard fell over in the boat. It was quite violent… Will we do it again ? If we could set off again as a crew on this boat, we’d willingly do it. We are all very positive about what happened between us.”

Bernard Stamm : “Surfing along at 45 knots”

“If I had to pick one moment, it would be surfing along at 45 knots. I can’t remember when it was exactly, but I think it was in the Indian. The boat is very demanding at between 35 and 40 knots, but when you spend a long time above 40 knots, it’s not something you’re going to forget.”

Gwénolé Gahinet : “Diving down in the Indian and the human aspects of the adventure”

“One of my strongest memories is going right down in the Southern Ocean for the first time south of the Kerguelens and Heard Island. We had to go a long way south to get the record in the Indian Ocean. It was a real baptism of fire diving down to almost 60 degrees south with the sea temperature at two degrees. And you just keep going at 35 knots watching out for icebergs… it was demanding and exciting, and the cold was particularly tough. One night, the boat actually froze. The nets and deck were frozen, which is exceptional, when you’re sailing. It was a huge moment ! But more generally, what was fantastic in this round the world adventure was the human aspect and the way we all pulled together as a crew. We had some great times and this was a wonderful voyage around the world. We were all quite different and had lots of stories to tell each other. Each time we changed watch, there were lots of anecdotes, we chatted a lot and laughed a lot too ! That’s the main thing.”

Boris Herrmann : “Meeting up with Spindrift”

“One great memory for me was when we met up with Spindrift close to New Zealand… It was incredible crossing paths like that after sailing half way around the world. There was a great atmosphere on board, but it was the round the world voyage in general that was such a great experience. I think I learnt a lot of little things with this crew and became a little more mature as a sailor. It was an enriching experience with the others on board this magnificent boat.”

“For me, the greatest moment was Cape Horn. Getting away from the Southern Ocean so close to this legendary rock, which I was rounding for the first time with a magnificent sunset was something else. It’s a great image, which sums up the moment you get away from the Southern Ocean. There was a great atmosphere on board. Everyone supported each other. We discovered each other, as we didn’t really know each other before setting off and that is never easy when there are six of you on board a boat like this. We laughed a lot. And after 47 days together, we know each other better now.”

“Of course, we’re pleased to finish this round the world voyage with a very good time, even if we didn’t smash the record. There were some great times on board and a fantastic atmosphere, which I’m sure you felt back on dry land. If I had to choose one particular ‘photo’, one magic moment, for me it would be seeing that huge iceberg in the South Atlantic on a magnificent sunny day. Out on deck, we were all amazed at this sight. It was as if it had been placed there just for us ! There was also a great atmosphere on board. I like to laugh. I think that contributes to your performance and efficiency, and it helps too when things aren’t going so well. That’s important… There were some great people aboard !”

The crew of IDEC SPORT

Reminder of the Record :

Francis Joyon’s goal this winter is to attempt to improve on the Jules Verne record, held by Loïck Peyron and his crew with a time of 45 days, 13 hours, 42 minutes and 53 seconds.

An “ultimate” challenge for Joyon, who is still the fastest solo round the world sailor. Aboard his former IDEC in 2008, he completed the round the world voyage in 57 days, 13 hours, 34 minutes and 06 seconds. 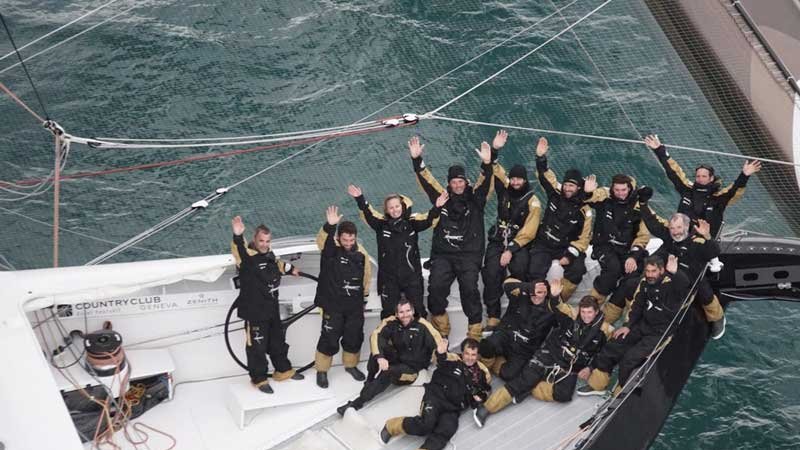 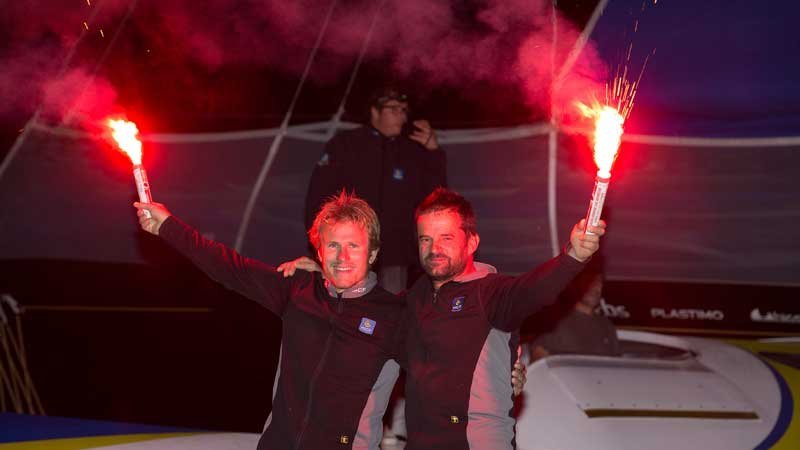