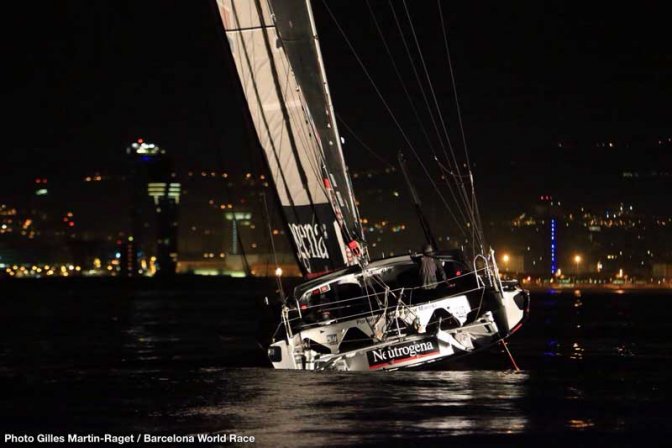 Ghosting across the line in the inky blackness of a Mediterranean spring night, finally slicing through the finish line set on the very waters where some 40 odd years ago he cut his teeth as a young, aspiring sailor harbouring great dreams, at 01:47:00hrs local time Guillermo Altadill and his talented, ever reliable Chilean co-skipper Jose Muñoz secured second placed in this third edition of the Barcelona World Race Barcelona World Race #barcelonaworldrace , the round the world race for two crew which left the Catalan capital on December 31st 2014.

After pressing the eventual race winners hard until New Zealand, where Altadill and Muñoz had to take the tough decision to make a 24 hours pit-stop to repair their engine generator, they finish 5d 5h 56 min 36 secs behind Cheminées Poujoulat’sBernard Stamm and Jean Le Cam.

The Spanish-Chilean partnership, which was only competing in their second major IMOCA Imoca #IMOCA race as a duo, finished the theroretical 23,321 Nms course in 89 days 11hrs 47mins at an average of 10.86kts.

Altadill and Muñoz were honoured on the finish pontoon, at the base of Barcelona’s iconic Columbus statue, by recently crowned winners Bernard Stamm (SUI) and Jean Le Cam (FRA) and Hugo Boss skipper Alex Thomson (GBR) who lead the early stages of the race until their mast tumbled down.

By making their technical stop into Bluff, South Island New Zealand, the duo are reckoned to have lost 930 miles, or close to the 90 hours which was Altadill’s prediction as they as they diverted om 11th February. Afterwards, until their return to the North Atlantic, they maintained a very similar margin behind Cheminées Poujoulat. But despite their losses Altadill still paid a rich tribute to the winners, saying ’they sailed an awesome race, did not mak e mistakes and probably would have won anyway even if we had not had to stop."

Barcelona’s Altadill, 52, who has one of the most storied, varied and successful careers in global ocean racing becomes the first Catalan ever to stand on the podium of the Barcelona World Race Barcelona World Race #barcelonaworldrace . As well as his ocean racing career, Altadill has served as a successful coach in Spanish Olympic sailing, coaching the gold medal winning Tornado crew in 1996. He sailed in the 2007 America’s Cup America's Cup #AmericasCup with Team Germany.

Completing his seventh circumnavigation, he already has two round the world race podiums to date in the Volvo and Whitbread races and won The Race, the maxi multihull race around the world, in 2000-1 on Club Med with skipper Grant Dalton.

Chilean José Muñoz, 42, is one of South America’s best known ocean racers, and in finishing second today has made a very successful step up from the Class 40 Portimao Global Ocean Race. With his close friend, mentor and co-skipper on Felippe Cubillos on Desafío Cabo de Hornos (Class 40), he took second place in the 2008-9 two handed race, with stops, around the world. Off Cape Horn on 28th February past, Muñoz paid a very warm tribute to the inspirational Cubillos who died in a plane crash in 2010.

For Altadill, this is one of the high points of his career, finishing runner up in the two-handed round the world race which was originally conceived to promote his home city. He was one of the pioneering skippers to take the start line in the inaugural edition in 2008-9 but rudder problems meant he and American double Olympic medal winning co-skipper Jonathan McKee were the first duo to have to retire from the race, before they had even reached the Indian Ocean. Success today completes a measure of unfinished business for Altadill. They raced the final 26 days of the course with almost no communication Communication #Communication tools after losing their antennae as a result of a crash gybe.

Second place maintains the very successful record Record #sailingrecord for the IMOCA 60 which was designed by Farr Yacht Design, and built in Cowes, England by Offshore Challenges Sailing Team originally as the Estrella Damm for Altadill and McKee. It lead the 2008-9 Vendée Globe in the hands of French skipper Sébastien Josse as BT before he had to retire into New Zealand. In 2010 Roland Jourdain sailed this boat to win the legendary Route du Rhum Route du Rhum #RouteDuRhum against many newer generation boats. Altadill’s passion for the boat helped him to influence British skipper Alex Thomson into buying it for the 2011-12 Vendée Globe. As a precursor to this, he helped develop and optimise the boat which he and Thomson then sailed to second in the Transat Jacques Vabre Transat Jacques Vabre #TJV2015 two handed race to Costa Rica. And with the same boat, Thomson then broke his Vendée Globe hodoo to finish third in 2012-13.

Although the combination of Altadill’s rich and varied experience, Munoz’s vigor and reliabilit y matched to the well proven, highly optimised IMOCA 60 clearly marked them out as one of the pre-race favourites, Altadill always refused to acknowledge this, saying that ’it is down to the ocean to decide’. But since the very first hours of the race, Neutrogena have been among the vanguard of four, pressing hard early leaders Alex Thomson and Pepe Ribes on the newer, theoretically faster Hugo Boss before a dismasting . Altadill and Muñoz proved well able to not just match the pace of the leaders, but frequently exceed it. They lead the race four times, most recently on 17th January and after an initial tactical loss on the entrance into the Indian Ocean, they certainly matched Cheminées Poujoulat’s speed. Had they not had to stop in to New Zealand, perhaps the final outcome of the race might have been different !

GAES Centros Auditivos are due to complete the podium, looking set to finish third in to Barcelona on April 1st. 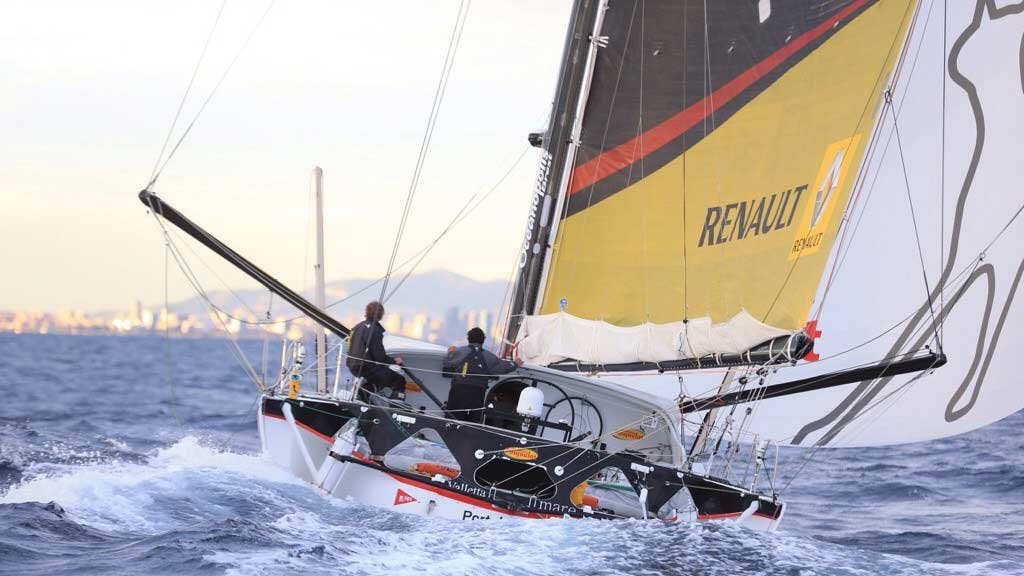 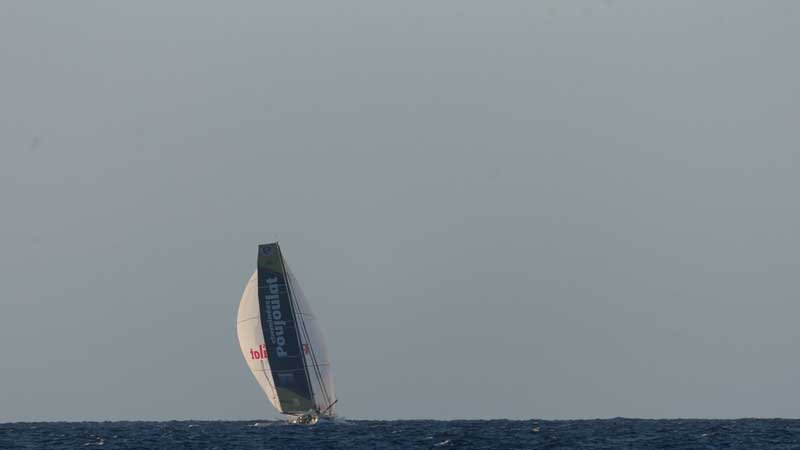 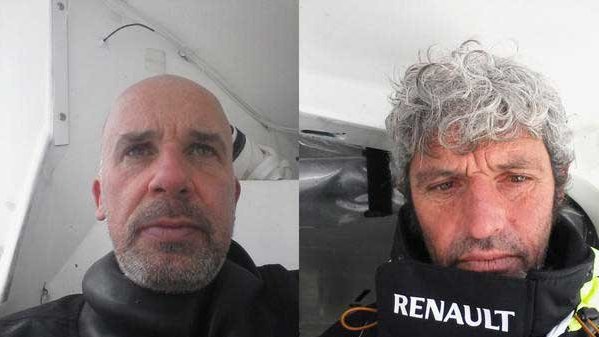 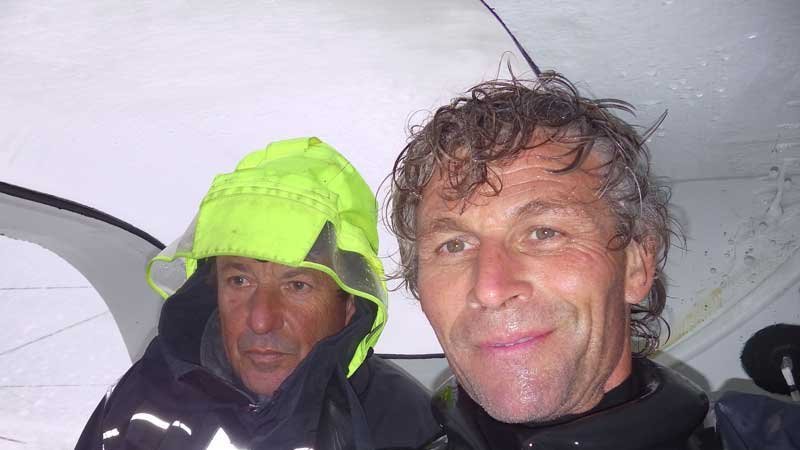