A.S.O. unveiled the route of the next edition of the Tour de France à la Voile 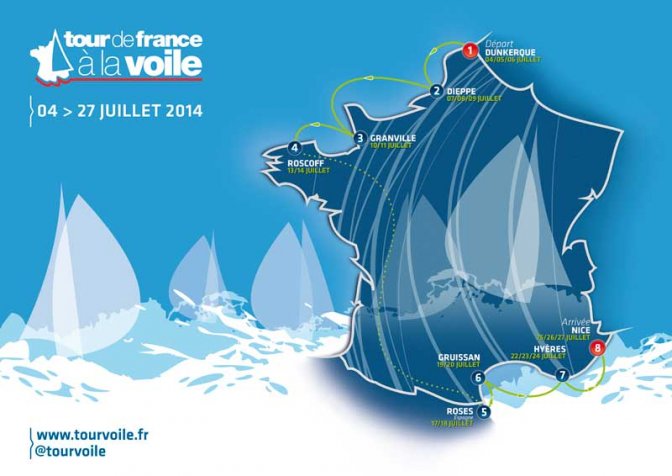 Amaury Sport Organisation Organisation #organisation unveiled the route of the Tour de France à la Voile 2014 at the opening day of Paris Boat Show. From the eight stopovers to the presence of Grand Surprise boats next to the M34s on the racecourse, all of the 2014 innovations have been detailed behind a large audience of skippers, crew members, officials from the host ports, media and key players of the sailing world.

A new route : three weeks of racing and a focus on the English Channel and the Mediteranean Sea

Eight cities will welcome the fleet this year. From Dunkirk to Nice, the teams will cover a total of 900 miles. With 24 inshore races, 6 offshore legs and 4 nights at sea, the rhythm will be gruelling and the race will take place over three weeks only instead of four. “A three-week event makes for a denser and more exciting race for the fans and suits the teams’ budgets. We also chose to move the Tour de France à la Voile a week later in July so that it starts with the summer holidays,” said the event director Jean-Baptiste Durier.

Looking at this new route, race director Christophe Gaumont explained the balance between four stopovers in the North and another four in the South of France. The fleet will stop in Dunkirk, Dieppe, Granville and Roscoff before crossing over to the Mediterranean side, starting from Roses in Spain, Gruissan, Hyères and Nice. The first part of the route will be tricky because of the English Channel’s usual dangers (traffic, current,…). The Mediteranean part will play a key role with the summer’s light airs or strong breeze.

In 2014, the key change will be the presence of the Grand Surprise boats within the fleet. This one-design boat will be sailed by young and amateurs teams, next to the professional teams sailing the M34s. “One of our objectives in 2014 is to re-establish the Tour’s history, an event always open to both the professionels and the amateurs. We had to make sure the conditions would be favourable for young and amateur teams to join – they are part of the Tour’s DNA. For different reasons, including economical ones, they almost disappeared from the start line in the past years. That’s why we are adding the Grand Surprise as the second one-design fleet of the Tour 2014,” said Yann Le Moënner, A.S.O. general director. The Grand Surprise is one-design – a compulsory factor for the Tour de France à la Voile –, the boat is easier to handle for amateur teams and it brings costs down.

As for the professionals, a member of the Groupama team was at the Boat Show this morning to bring the trophy back into the game. Groupama 34’s skipper Franck Cammas won the 2013 edition and could be announcing his return in the next days. Daniel Souben (Courrier Dunkerque 3) and Nicolas Troussel (Bretagne Crédit Mutuel Elite) are looking forward to July already, just like many of the Tour’s loyal competitors attending the route announcement today. Foreign teams were there too, such as the German team Iskareen, the Belgium project of Mady Fobert, Leonid Klepikov’s Russian team (a 2012 competitor) or the Swiss teams Ville de Genève - Carrefour AddictionS and Bienne Voile - SRS.

M34 M34 #M34 and Grand Surprise boats will sail together on the same racecourse but two different rankings will be introduced : Elite and Amateur.

A celebration at sea and ashore

The Tour is becoming a greater summer event ashore. 200,000 visitors came to the race villages to see the Tour de France à la Voile competitors in 2013. Since 2012, A.S.O. is developing this activation around three main themes : a race village open to the public and offering a wide range of activities, an entertainement area on local beaches and a small advertising convoy. The Tour will once again meet its public this summer – sailing fans or not, it will be a great celebration in each of the stopovers. 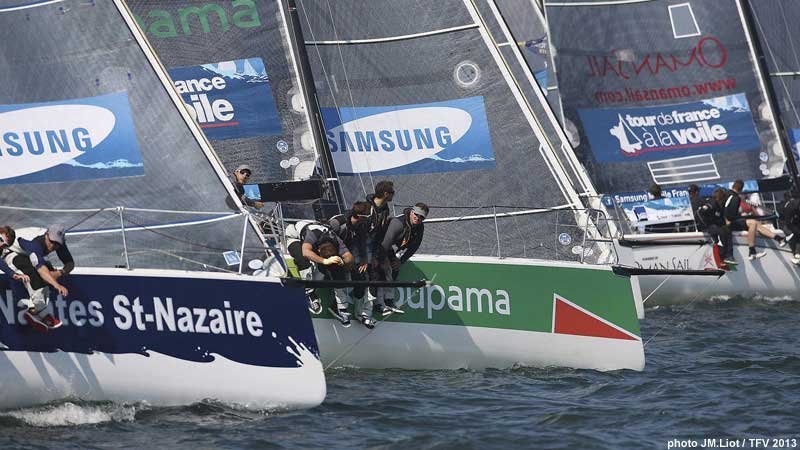