Wrapping Up a Fabulous Week at Quantum Key West 2012 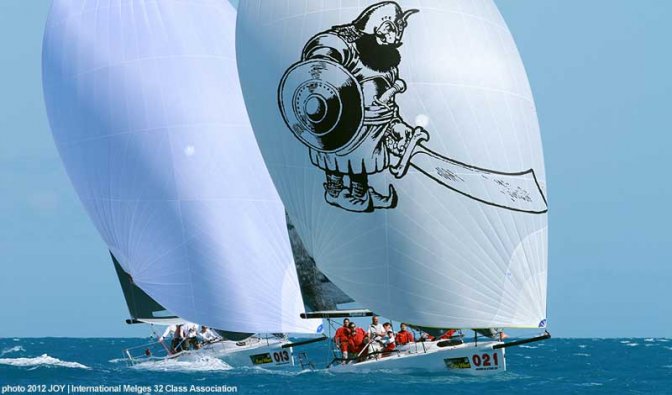 It was a frantic finish at Quantum Key West 2012 as several boats snatched victory with strong performances on the fifth and final day. Barking Mad pulled off one of the greatest comebacks in the 25-year history of the regatta, winning the Farr 40 class despite suffering a dreaded DNF. Barking Mad, skippered by Jim Richardson of Newport, R.I., did not finish Race 2 after a scary man overboard incident.

That type of result usually proves fatal in a no-throwout series, but the Barking Mad team kept plugging away — winning three of the final five races to pull out an improbable one-point victory.

“I wasn’t too optimistic that we could win the regatta after what happened in that second race, but we just had to keep sailing with the understanding that every point was crucial,” Richardson said. “We got better as the week went along and everything just sort of fell into place at the end.”

Richardson steered the boat to a third place finish in Friday’s first race, passing Provezza 8 at the finish line. That one point would ultimately prove crucial as Barking Mad wound up winning Race 10 and beating Enfant Terrible (Rossi Alberto, Italy). It was Richardson’s second victory in Farr 40 class at Key West.

“We were four points behind Struntje Light and one ahead of Enfant Terrible going into the last race so we figured we had to win and hope those two boats beat each other up,” Richardson said. “I think Enfant sat on Struntje a bit and pushed it back to sixth. Things just played out perfectly for us.”

Skipper John Kilroy and the Samba Pa Ti team held off a stiff challenge from Pisces to capture the talent-laden Melges 32 class. Pisces, skippered by Benjamin Schwartz, briefly took the lead by posting a pair of bullets on Tuesday, but Samba responded by placing fourth or better in five of the last six races to win by 12 points.

Samba Pa Ti was selected as Quantum Boat of the Week for winning the closest, most competitive class at the 25th anniversary regatta.

“It is always great to win in a high-caliber fleet like this,” Kilroy said. “What I like about this 32 class is that there are so many great sailors and so many well-prepared boats. You have really got to be on top of your game to win any regatta in this class, much less one as competitive as Key West.”

“It was a quintessential Key West race week with fantastic weather and super sailing conditions,” Kilroy said. “We had a lot of confidence in our boat speed and our crew work was excellent all week.”

Competition was fierce all week in PHRF 1 class with four different boats winning races. Teamwork, a J/122 owned by Robin Team of Lexington, N.C., fought its way through the fray to edge the J/111 Mental (Paul Stahlberg, Barrington, Ill.) by four points. It came down to the final day and Teamwork was up to the challenge, winning Race 9 and placing second in Race 10.

“We come down here to Key West to get the best competition we can find and boy did we this year,” Team said. “We could not believe how close the racing was in this class. Tres Hombres, Mental and Rush were all very well-sailed and pushed us from start to finish.”

This was the second Key West victory for Team, who won in 2003 with a J/120. North Sails professional Jonathan Bartlett called tactics while fellow Annapolis residents Jeff Riedel and Kevin Ryman trimmed the jib and spinnaker. It was a particularly special win for Team since he had brother Adam and sons Alston and Coleman aboard.

“We were as well prepared as we ever have been for this regatta and it’s a good thing because our competitors were really, really good,” said Team, who also took top honors in the J/Boats Subclass.

Things were equally tight in the new High Performance class with the newly-launched Carbonado beating the GP 42 Stray Dog (Charles Engh, Lusby, MD.) by a mere three points. Carbonado, a McConaghy 38 owned by Rob and Sandy Butler of Ontario, Canada, is a cutting edge design with all carbon-fiber hull and rig. Quantum pro Marty Kullman called tactics for Rob Butler, whose wife worked the pit and 14-year-old son Riley served as a grinder.

“Considering we got on the boat for the first time a few days before the regatta we are very pleased with this outcome,” Butler said. “The boat performed well, the crew came together and we had a lot of fun sailing in such a beautiful location.”

Things were still in doubt going into Friday’s action, but Carbonado sealed the deal by closing with a first and a second.

“It’s a new boat and a new crew and we learned both very quickly. The boat is fairly easy to sail right out of the box and our crew work got better as the week went along,” Kullman said.

Some classes were already decided going into the final day, but that did not stop the leaders from going out on the water and putting an exclamation point in their victories. Ran, a Judel-Vrolijk 72-footer owned by Niklas Zennstrom of the United Kingdom, ran away from the competition in the Mini Maxi (IRC 1) class. Seasoned British pro Adrian Stead served as tactician aboard Ran, which won all 10 races and also captured the IRC Midwinter Championship.

“This is by far the best we’ve ever sailed the boat. This is our fourth year racing the boat so we know it really well and have it set up perfectly,” said Zennstrom, who called Key West a “fantastic regatta” and praised the race committee work. “Our crew work was flawless all week. We did not have one bad gybe, one bad set or one bad mark rounding.”

It was a similar story in Farr 30 Farr 30 #farr30 as skipper Deneen Demourkas (Santa Barbara, Cal.) and the Groovederci crew compiled an entire line of bullets. Phillipe Mourniac called tactics aboard the reigning class world champion, which won most of the races going away.

The 52-foot class was expected to be a bare knuckle brawl with all eight entries filled with fully professional crews. There were two brand new designs in the fleet with Highland Fling XII (Reichel-Pugh) and Interlodge (Botin Partners) both tricked out for the IRC rule. However, it was an older design still configured to the TP52 rule that stole the show as Quantum Racing finished first or second in all 10 races and defeated runner-up Powerplay (Peter Cunningham, Cayman Islands) by a whopping 18 ½ points.

It was somewhat fitting that Doug DeVos, primary shareholder for regatta sponsor Quantum, skippered the victorious 52-footer. Terry Hutchinson, skipper for America’s Cup America's Cup #AmericasCup challenger Artemis Racing of Sweden, did a brilliant job of calling tactics for DeVos, who mathematically clinched victory with three bullets on Thursday, but still sailed Friday and tacked on two seconds and earned the Quantum Boat of the Day honor in the process.

“What a great regatta we had this week. We had those classic conditions you always find in Key West and it just made for some great sailing,” DeVos said. “The competition in the 52-foot class was very good, but what makes this event so fun is the town and the night life and catching up with so many friends from the sport of sailing.”

Willem Wester finished second at Key West last year so the Netherlands native decided to up the ante, buying a new boat and bringing some major talent aboard. Wester upgraded from a Grand Soleil 43 to a Grand Soleil 46 and hired Volvo Ocean Race Volvo Ocean Race #VolvoOceanRace veteran Bouwe Bekking as tactician. Those moves paid off as Antilope won seven races and led from start to finish in winning IRC 3 class by 19 points.

“It is always great to win a major international regatta, but even better when you do it in the type of conditions we had here this week,” Wester said. “It was absolutely perfect out on the water today — blue skies, 15-18 knots of wind — you couldn’t ask for better sailing weather.” 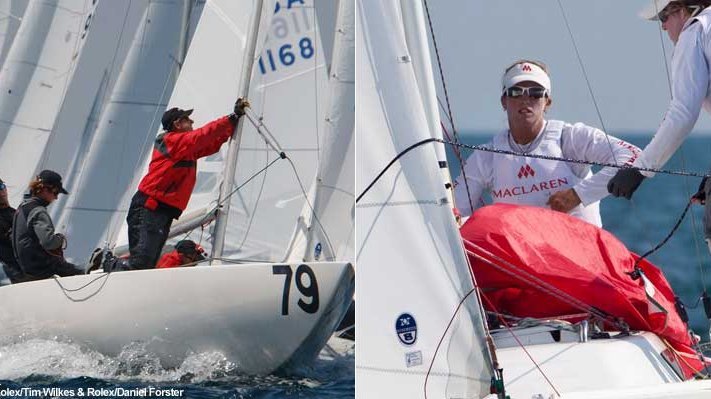 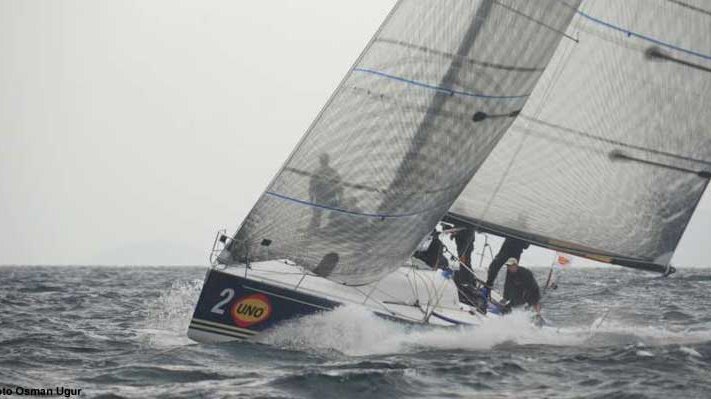 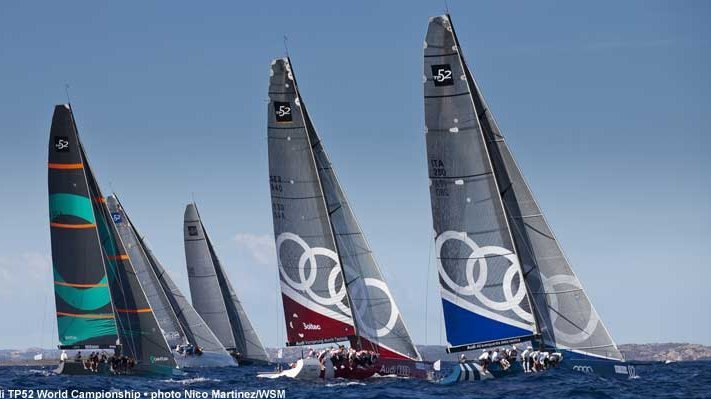