Knut Frostad : "I don’t know why we were slow"

Djuice’ skipper on the dockside in Miami 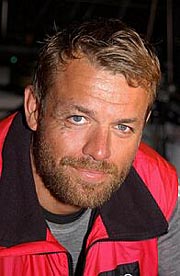 Q : You did so well coming into Rio, what happened ?

A : We started well in Rio, and I don’t think anyone sailed better than us the first couple of days, but we were slow unfortunately, and that was the problem. I don’t know why we were slow, basically when we were sailing the right way, and they were sailing the wrong way, it looked like we were even. So we relied on the others making mistakes for 48 hours, after the first two days there were no mistakes to be made, it was north of Brazil and pretty straight sailing.

So when we were struggling with speed we had to give up our lead, we had to give up on Tyco, Assa and illbruck. Then we got to the Doldrums, which was an interesting experience for us, as we definitely went the wrong way, we were only seven miles from everyone else but we were parked at the other end. Looking back we shouldn‚t have been there ! After that it was terrible to be where we were, we wanted to go somewhere else but we couldn’t go there as we were stuck. It was horrible.

After the Doldrums we just did the best we could, it is never good to be at the back, but we are very happy that we beat the girls as it gives us one point on them, but that was hard enough ! Then as you may have seen on the position report, yesterday and the night before, we had between two and zero knots, just drifting around in a graveyard, watching everyone else beating to the finish line. We didn’t feel bad about it, that was very on form with what had been happening last week, we couldn’t do anything but try our best.

The problems we had with speed were very disappointing, as we had worked a lot on reaching speed, for some reason we got worse. We know we had a problem with our rig, the top of the rig was bending the wrong way. That’s life, and it’s disappointing. The crew kept it good together though and we had a really good atmosphere onboard, in the end, after the Doldrums, the whole thing was more a parody for us.

We were disappointed because we were on fire in Rio, at the start, we cleaned out the start, everything we did for the first two days was right. Although, already on the first night we were struggling a little with illbruck and Assa Abloy, and we couldn’t keep pace.

Q : What does it mean for you if you‚re slower, and you don’t know why ?

A : We know for sure it is something with our boat, it is not fast enough when reaching. That is clear as we have a pretty good sail programme, we have the same sail designers as News Corp, and they’re good sails. We have a good crew that works like hell. The only thing we can do is try to be better when reaching. All other conditions we are fast, in light airs we are fast, we never struggle with SEB, Amer Sports One or anyone in light airs, and upwind we are good as well. We just need good conditions, and not all the things we can do something about, we can‚t change the boat. It is easy to sail well when you are fast, I was quite impressed that we sailed so well for the first couple of days, because we were slow. Everyone crossed us, and passed us, then we managed to get stuck in the front again and it was terrific. It is really hard for the crew as they fight as hard as the other guys, and they get rewarded with nothing.

Q : Do you feel now that you chose the wrong boat ?

A : I guess we have so far. I can’t say any differently as we are slow reaching. The last leg we didn’t have that reaching problem, as there was no reaching, and we were fast with the conditions we had. So it depends, if the next four legs are good for us, then it’s a good boat. In the conditions when we are slow, we have to sail smarter than the other guys, and they have to make mistakes, and if we can do that then we are even, or better.

Q : What was it like when you were behind the girls ?

A : The girls are bloody fast, I will tell you that ! A lot of us were behind the girls at some point, I loved seeing Grant behind the girls that was good ! The girls are fast like hell in some conditions, but they lose when they become tricky. The girls were quite far ahead of us, and then we passed them which was a good feeling. I think they sailed a very good leg, half way through the leg they were ahead of SEB, News Corp, Amer Sports One, us, and they were almost up there, if the leg had been half as long they would have been up there.

Q : You’ve made a lot of crew changes ; you said in Rio you had the ideal crew :

A : Yep, I have an awesome crew, I wouldn’t change a thing about them. Unfortunately Franck can’t stay with us, he could only sail one leg, but that is o.k. as we have plenty of people now, we have two extra so that is not a problem. We have Erle coming back and Terry now. But the guys were awesome, really, really great. I’ve never had so much fun doing so bad !

Q : You’ve changed your crew quite often throughout the race, has that affected your results so far ?

A : Yeah, we have lost two of our prime guys ; one due to a family tragedy and the other because of a problem ; another two we lost with illness, and we didn’t know if they were coming back or not, but now they are coming back, and Christian is coming back and so we are almost back to the old team. It is always hard to lose key crew members, but I think we managed to cope o.k.

Q : What are your thoughts about the next four legs ?

A : We will do what ever we can to be faster in the conditions where we lack speed, that is the most important thing. It is going to be a hard race for us, as we have to accept that we are sometimes lacking in speed, and that is horrible in a boat race - you always want to be the fastest boat. We have to accept that there will be some times when we are slow, but we hope that the weather will pass us, and not put us in a position where we lose more, like we did this leg. There are some conditions where we are really fast, like downwind when it is windy, and upwind in really light airs, so if we get a lot of that we will have the opposite. That has to do with luck, I can’t control that !

Q : The emails we got back from the boat blamed your poor performance on what you did in Rio ?!!

A : I know, they even threw my shoes overboard ! I didn’t do anything bad in Rio, and I would openly confess if I did ! We had this discussion this morning, about who had done something bad, and obviously we had Amer Too stuck behind with us - the only thing in common we have with them is Jonas and his girlfriend Anna, so luckily that diverted the attention away from myself !!

3 Questions Net To : Bunny McDiarmid : "New Zealanders are happy to have a French entry into the America’s Cup but not at any price"