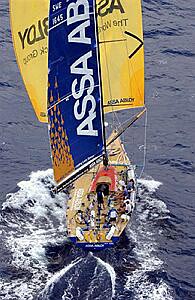 Photo : Rick Tomlinson
At 0549 ASSA ABLOY crossed the finish line winning this leg and securing second place in the overall standings of the Volvo Ocean Race Volvo Ocean Race #VolvoOceanRace . British skipper Neal McDonald and his American Navigator lead the yacht always in contact with the lead for the whole leg. For several days, the Swedish yacht was leading the fleet.

In a fabulous finale, they left their long time shadow Tyco behind and went neck and neck with the then leading yacht, illbruck. Having avoided any serious sail damage on this leg, it allowed them to sail away from illbruck, who was lacking a light wind spinnaker, which they lost overboard three days ago.

This victory is the second time in the Volvo Ocean Race Volvo Ocean Race #VolvoOceanRace that ASSA ABLOY stands on top of the podium, after the Sydney to Auckland leg with line honours in the Sydney - Hobart Race. Being rated as one of the favourites before the start in September last year, it took the team two legs to get the boat and crew into a winning performance.