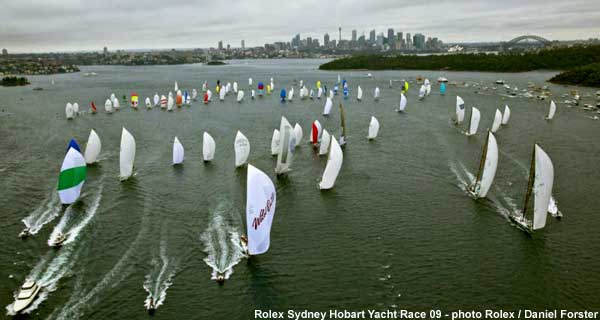 Neville Crichton’s Alfa Romeo took round one of the battle of the maxis at the head of the 2009 Rolex Sydney Hobart Yacht Race with smart downwind tactics in Sydney Harbour. After a two nautical-mile spinnaker run from the start off Shark Island, before a 10-knot south-southwesterly breeze, Alfa Romeo rounded the first clearing mark at Sydney Heads 30 seconds ahead of her near-sister Reichel/Pugh 100 design Wild Oats XI (Bob Oatley), with another 20 seconds to the British Farr 100-footer ICAP Leopard (Mike Slade).

These three strongly-sailed, professionally-managed maxis are favoured to lead the fleet into Hobart, 628n miles from the start.

Manoeuvring these giants for a downwind start among the smaller boats in the 100-boat fleet was challenging. With a minute to go, Alfa Romeo was caught ahead of the line and had to re-round to start on the gun.

Wild Oats XI, with speed and a smart spinnaker set, showed out as the early leader from a clear start near the middle of the long starting line spanning nearly the width of the harbour, followed closely by ICAP Leopard.

Alfa Romeo, starting nearer to the line’s pin end, sharpened up with pace to gain an overlap to leeward on Leopard. Off Watsons Bay on the harbour’s eastern shore, Alfa gybed away first on a patch of good pressure breeze ; Wild Oats XI and Leopard followed. But as Alfa Romeo gybed again and came back fast on starboard gybe, she cleared them both to round the mark between the Heads clear ahead.

From there Alfa comfortably held her lead in a procession over the one nautical mile reach to the second clearing mark, another mile to seaward.

As the fleet then sheeted on to head south, another procession developed. Starboard tack on about 155 degrees was by far the gaining leg towards not only Hobart, but the favourable flow of the Eastern Australian current, so tacking away on to port and heading inshore was not an option for the boats behind Alfa.

Next to round the seaward mark was another 100 ft maxi, Investec Loyal (Sean Langman), followed by the UK Judel/Vrolijk 72 Ran (Niklas Zennstrom), which is one of the favourites to take the race’s major prize, the Tattersall’s Cup, for the overall winner on IRC corrected time.

Grant Wharington’s Jones 98 Etihad Stadium (ex-Wild Thing) retired with rig problems soon after starting. It was a near-miracle that Etihad Stadium even made the start after a two-week around-the-clock effort by crew members, mast-makers, and riggers to replace the mast broken on the delivery voyage from Melbourne.

The mast, a rebuild of a spare acquired from Neville Crichton, had to be cut in two for air-freighting from France to Sydney and re-rigged just in time for Etihad Stadium to get to the start line today without time for any testing under sail.

Wharington explained that ten minutes before the start, the crew discovered that the finely-tuned mast could not be kept in column. Misalignment of the runner blocks from the old rig meant that the runner tension of up to 15 tons could not be maintained.

"It was an incredibly tight set of circumstances and we needed everything to fall into place with 100 per cent agreement on everything to go to Hobart," Wharington said. It’s an amazing feat to get to where we got, obviously disappointing just to miss out by the last one or two percent.

"I am enormously disappointed obviously and for my team more than anything because we’ve had probably 50 people working on this for the past two weeks and an enormous amount of input from every single person."

Another sad retirement was the Inglis 39 She’s the Culprit (Todd Leary) from Hobart, seriously holed on the long journey home in a collision with another competitor (as yet unidentified) soon after the start.

Untypically for Sydney at this time of year, Boxing Day was wet and cold, which greatly reduced the size of the spectator fleet. Though with this came the benefit of also reducing the crush of powerboaters that often disrupt the fleet with their wakes once past the outer sea mark, which is beyond the spectator control areas inside the harbour.

Five hours after the start, with the sou’-wester freshening to 25 knots and a difficult short chop developing offshore, the Cruising Yacht Club of Australia’s satellite yacht tracker system showed Alfa Romeo still leading by a mile from Wild Oats XI, which was just 0.2nm ahead of ICAP Leopard. 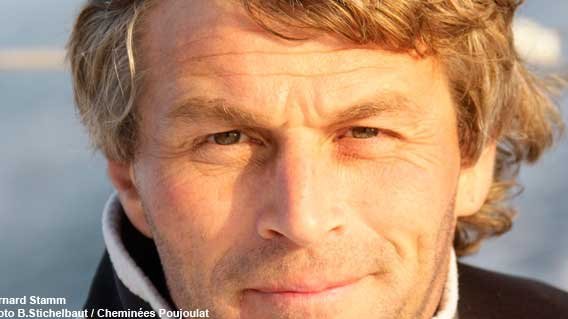 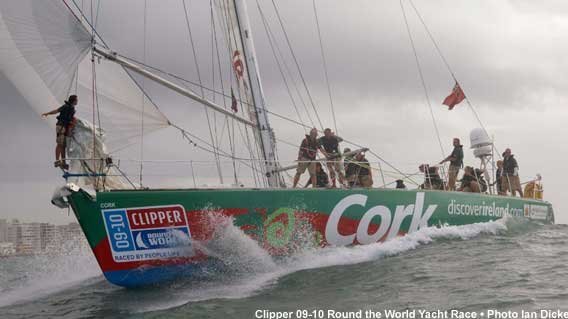 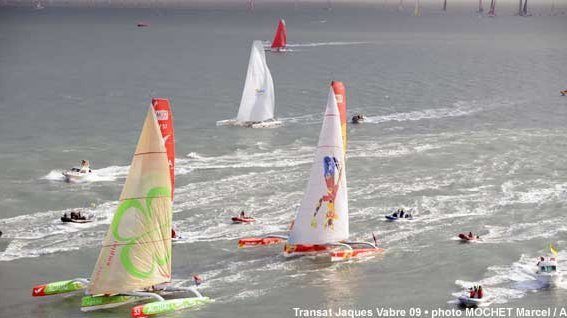