Orange arrives in the southern hemisphere

Seven days and 22 hours for the north atlantic

The maxi-catamaran Orange crossed the equator at precisely 6h36 this morning (French time), 7 days and 22 hours after having crossed the start line of the Trophée Jules Verne. Bruno Peyron and his crew are now sailing in the South Atlantic, gliding along 800 miles east of Fortaleza (Brazil). The Doldrums now lie behind them, having slowed the giant down for just thirty hours. Today’s goal is to continue heading southwards towards the next tricky spot in the shape of the Saint Helena High."And it doesn’t look as though what lies ahead is that straight forward !" commented Bruno Peyron during today’s radio session. 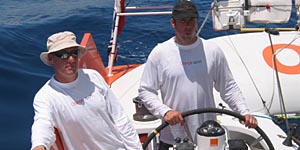 Instantaneous speeds of 9.1 knots at 8h00 this morning, 11 at 9h00, 12.4 at 10h00 then 14.2 knots at 11h00... Everything’s fine, the Orange maxi-catamaran has turned her back on the Doldrums once and for all and is now gliding south along the coast of Brazil in an easterly trade wind which is " a little bit too light " for Bruno’s taste. What lies ahead is not the easiest type of situation to handle, being complicated by the fact that the Saint Helena High - which is usually positioned off the coast of Africa - is tending to move over to the coast of South America. As a general rule, the fastest way round this zone of light winds is to speed Speed #speedsailing down the South American coastline, the very zone which is now literally barring access to the famous Southern Ocean. " Quite how are we supposed to sort ourselves out with our friend the South Atlantic High ? " wonders Bruno? The question of the day. Although the Orange maxi-catamaran is doing 14 knots in an 10 knot easterly wind right now - a beam wind - the situation over the next few days is quite complex indeed. " It’s a little too early to say what we’re going to do, explained Bruno Peyron during the radio chat session, but we’re sure that in a couple of days from now, that we will have to make a decision. Whatever we opt for, we’ll have to chose between going west round the High along the Brazilian coast, or cutting straight across it, even if it means beating into the wind". "The High is getting bigger and bigger all the time and is closing the door from East to West confirmed in turn Gilles Chiorri, Orange’s navigator. We?re beginning to wonder whether it might not be best to cut across the ridge. A decision needs to be made but it’s too early yet to say what’s best. But we may have to play our first jokers with this first real challenge... ". Remember that this morning, as the Orange maxi-catamaran crossed the equator, she had a 3 day and 6 hours lead over the Trophée Jules Verne reference time set by Olivier de Kersauson on Sport Elec in 1997.

The sun enemy number one !

" It’s hard getting to sleep as it’s really hot inside the black and orange hulls explained Sébastien Josse during the chat session. Exposed to full sunlight, the materials must be not far off 90°. The deck is so hot it burns your feet, making it impossible to walk barefoot up on deck ! Yesterday Bruno gave me two buckets of sea water for my feet so that I could stay at the helm. That way my feet didn’t burn and I was able to splash my knees with water to keep cool ". Great... You have to understand that in these latitudes, the sun is omnipresent and the clouds are conspicuous by their absence. And although the crew can stay in the shade of the sails or under the visor of the " pergola ", the helmsman often has no choice but to remain fully exposed to the sun. Cap, sunglasses, sun block, long-sleeved t-shirt and lightweight trousers are the order of the day if you want to avoid major sunburn and dehydration.

Towards 6h30 this morning, Neptune in the form of Gilles Chiorri decked out in a mask and costume woke up Jean-Baptiste Epron, Ronan Le Goff, Florent Chastel, Benoît Briand and Sébastien Josse who were crossing the equator by boat for the first time. Celebrations to respect the tradition went on into this afternoon. We’ll know more about how it all went tomorrow...

Sébastien Josse : " This was the fist time that I had crossed the Doldrums and it was a bit like what I’d seen on the television. I’ve seen all the videos of the big races and have been through the same thing in terms of atmosphere. It was damp, rather warm with a threatening sky and big squalls. However, we did not go through any squall and only had a couple of spots of rain ".

Bruno Peyron : " Looking back over this first week, the good news is that we are still in with a chance and that the boat is in superb condition ".

Jules Verne Trophy : Peyron and his boys let the record to Peter Blake

TROPHEE JULES VERNE : Orange is slaloming between the islands