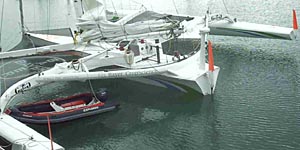 The new trimaran in the port of La Rochelle. Note the rudders (in orange). Photo : Bernard Gergaud.
Fresh out of the Mag Océa yard, the brand new trimaran Bayer has just been launched in La Rochelle. In a few days she will be confronting the ocean waves for the first time on her sail up to her homeport of La Trinité-sur-Mer where she will be officially named on March 29th.

The new trimaran which will therefore take the name of Bayer CropScience has now become reality. What was once just a 3D image on the screens of designer Nigel Irens has now become tangible. A sister ship to Fujifilm and Sergio Tacchini, the new Bayer has however a few special features that make her original : raised crossbeams, increased sail area, optimised deck layout for easier circulation between steering stations, raised winches, cockpit modified for improved protection in foul weather... Just some of the wise choices that should enable the boat to fine-tune her preparation before taking on the first Grands Prix of the 2002 season.

Bayer Sailing Team : 12 men standing by to board

Directed by Jean Maurel, in charge of the Bayer project but also tactician on board, the Bayer Sailing Team is a concentrate of experience and complementary talent orchestrated by the new skipper Fred Le Peutrec. Raised in the Olympic school (6th at the Atlanta games on Tornado) Fred is one of the finest helmsmen around and is a renowned and talented tactician. An experience reinforced by many offshore campaigns and aboard the biggest machines. Fred was selected by Bruno Peyron as helmsman for his different Atlantic Record Record #sailingrecord attempts on board his maxi-catamaran Explorer and has been a regular on the 60 ft multihull circuit, notably on board Fujicolor. Then came victory in The Race for the giant Club Med on which Fred was one of the helmsmen. From this rich experience, Fred knew that it was definitely offshore where he would be sailing next, but this time as skipper. "This post is a first for me, even though when I was sailing sports catamarans as helmsman I had to take the same decisions that I’ll be taking today. The difference this time is the size of the crew. I have no pre-defined method for managing these men who are also friends" confided Fred Le Peutrec, "I know only that there is a genuine relational harmony on board. The partnership with Bayer is clearly defined, the boat and crew are reliable, it’s a sound base for hoping to quickly obtain results". Presentation of the Bayer Sailing Team :

Loïc Lingois : 15 transatlantics, 19 grands prix, 6 Round Europes…Loïc’s vast experience has been forged on the greatest racing multihulls : Stalaven, Poulain, Jet Services, Elf Aquitaine, Pierre 1er… Today Loïc takes on the role of boat captain on the Bayer project, and on board he’s in charge of the mainsheet traveller.

Stéphane Marciak : Shaped in the rigorous one-design school, Stéphane who is also a qualified engineer is a specialist in naval architecture and composite materials. Precious skills that he was able to exercise during the design of the mast and rigging of the International America’s Cup America's Cup #AmericasCup Class 6e Sens. In charge of technical matters and computers aboard, he will be on halyards.

Franck Citeau : 6th in the Atlanta Olympics on Tornadoes with Fred Le Peutrec, a member of the Défi Français America’s Cup America's Cup #AmericasCup team on board 6e Sens, crewman on 60 ft multihulls, Franck is teaming up again today with the one he shared many a podium on the Olympic circuit. Franck will be in charge of mainsail trimming.

Alexis de Cénival : Récent winner of The Race aboard Club Med, Alexis combines his career as a dentist and his passion for ocean racing. Volvo Race, Admiral’s Cup, the Swan circuit... he has sailed on some of the greatest boats. On Bayer, he will be bow man.

Brice Berthier : In charge of the sail loft for the French America’s Cup syndicates in 86 and 92, Brice has also cut the sails for a great number of multihulls : Royale, Fleury Michon, Fuji, Commodore Explorer... A sailmaker for 15 years, he is in charge of the All Purpose sail loft. Brice will be Grinder on board (coffee grinder).

Julien Cressant : After starting on the Maxi circuit, Julien was selected by the Défi Français for the 99/2000 America’s Cup. He then sailed on Banque Populaire, Bayer en France and La Trinitaine before participating in The Race alongside Loïck Peyron. This year Julien will be organising his work schedule between Bayer, where he will be a wincher, and the Défi Français Areva.

Nicolas Pichelin : After a victorious circumnavigation aboard Club Med in The Race, Nicolas joined the 60 ft circuit where he sailed last year on La Trinitaine and Bonduelle. Nicolas also participated in the entire records campaign of Explorer with Bruno Peyron from 97 to 99. With a huge thirst for sailing, Nicolas is also involved in the Défi Français, another adventure that will take him to the land of the Kiwis this coming August.

Jochen Krauth : A very talented windsurfer, Jochen has won many titles on the professional circuit including the PWA (Professional Windsurfers Association) World Speed Championship in 1996. A speed freak, he was the first to exceed 40 knots on the sea in 1990. His only multihull experience has been doing raids on sports catamarans. But Jochen is keen to learn ; he will be at the mast foot.

Jacques Roudeau : For 10 years, Jacques was involved with a multihull called successively RMO, Primagaz, Foncia and Bayer en France. As the boat’s technical manager, he took part in all the transformations, from the most radical to the most daring. Last May, he joined the "Bayer sailing Team" where he has since been the project’s technical manager.

Alexandre Marmorat : Alexandre deepened his knowledge on composites, the favourite materials of current multihulls, in the workshops of the Ecole National de Voile. Such skills have made him a sought-after preparer, whether it is of 60 ft monohulls like Whirlpool in the 2000 Vendée Globe, the development of the trimaran Fujifilm, or the technical overseeing of the new Bayer today.

Involved in the 9 Telecom Multihull Championship for the 3rd year running, the Bayer Group is now the owner of a new 60 ft trimaran. "Getting involved in sponsoring Sponsoring #Sponsoring is not a goal in itself" explained Miguel Sieler, President of the Bayer group in France. "It is quite clear that sailing is for us a vector and tool for communications that groups together a certain number of values close to our preoccupations. Ocean racing is a clean sport in the most ethical sense of the term, combining high technology, nature and respect for the environment, notions that are at the heart of the company. This sport is a field in which you need character, will power, courage, qualities of commitment and a rapidity of decision... The very qualities that we demand of our own managers."

To best answer this company project, Bayer has chosen to build a trimaran of the latest generation and to recruit a skipper with high potential. In command of this new Formula 1 of the seas ; a strong united team eager for success : "We have tried to use the most professional approach taking our inspiration from Formula 1. Jean-Maurel is at Bayer what Jean Todt is at Ferrari and we hope of course that Frédéric Le Peutrec will be our Schumacher" admits Miguel Sieler. The 2002 season can commence...!

Jules Verne Trophy : Orange to the Canaries in less than three days

TROPHEE JULES VERNE : Orange is zigzagging down the Atlantic

TROPHEE JULES VERNE : Orange covers 500 miles in 24 h away from the Portuguese coast