Telefónica Blue wedged on a rock 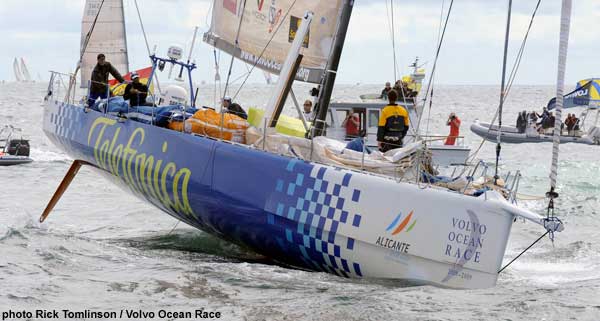 Drama today in Marstrand as Telefónica Blue/Bouwe Bekking became wedged on a rock and suspended racing at 1231GMT while leading the fleet at the start of leg nine to Stockholm. 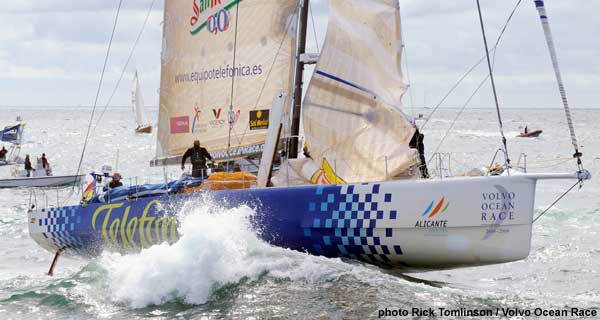 The boat hit the rock while racing at around 14 knots of boatspeed and is hard aground in one-metre swells. The team immediately dropped the sails, but the boat’s keel is firmly wedged within the rocks whilst the rest of the fleet is sailing away. A pilot boat and the coastguards are standing by and attempting to tow the boat clear. All the crew are unhurt.

Telefónica Blue was first across the start line, but PUMA quickly established a lead of around 10 boat lengths and Ken Read tacked a few metres away from the rocks, where the spectators enjoyed a grandstand view.

Ian Walker took Green Dragon in to a very light patch of breeze immediately after the start and the crew unfurled their enormous code zero fleet as they headed towards the spectator fleet on the right hand side of the course.

Out on the left, PUMA and Delta Lloyd had plenty of wind and for the first 20 minutes of this inshore lap, the left side of the course continued to pay very well, but the breeze was dying all the way across the racecourse.

A big lumpy swell made it difficult for the teams drive the boats in just five to six knots of wind and it was painful to watch as the boats came to a shuddering halt on every wave. The new breeze, when it came, filled in on the right hand side of the course and Green Dragon with the luck of the Irish, and had the first taster of the eight or nine knots of breeze, giving them the advantage in the approach to the first turning mark.

They took the lead followed one boat length behind by Telefónica Blue. PUMA and Ericsson 3 made up the top four, while Telefónica Black, Delta Lloyd and, unusually, Torben Grael and Ericsson 4 were the second string.

By the time the leading four had reached the final turning mark, the order had changed again and there was action and drama aplenty. Green Dragon had stayed out to the left of the course, nearest the spectator fleet, but the wind filled in from the right, causing them to lose their lead and allowing Telefónica Blue, Ericsson 3 and PUMA all to reach the mark ahead.

Rounding the mark, Telefónica Blue showed a clean set of heels, while Ericsson 3 caught their spinnaker on their spreaders, which rendered them dead in the water. PUMA powered in and quickly took the opportunity to nip between Ericsson 3 and the mark, as Ericsson 3 wallowed and the crew tried to sort out the mess.

Meanwhile, Green Dragon approached at speed, and sailed inside both Ericsson 3 and PUMA. They were not able to establish their position and it was Telefónica Blue, who led the fleet out into the Kattegat from archrival PUMA, Ericsson 3 and Green Dragon, until disaster struck and the boat struck the rock.

This is the second time that such a disaster has befallen Telefónica Blue. The team struck a rock in Qingdao just before the start of leg five and the boat had to return to Qingdao to be hauled out for damage inspection.

As this press release is closed efforts continue to tow the yacht free from the rocks before the more serious damage is done.

Telefónica Black sailed a solid race to hold off Delta Lloyd, while Ericsson 4 remained mysteriously at the back of the fleet having also had a poor spinnaker drop at the leeward mark.

The 525 leg nine is expected to finish in Stockholm on Tuesday. 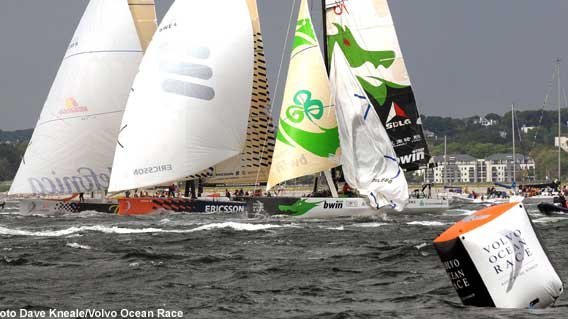 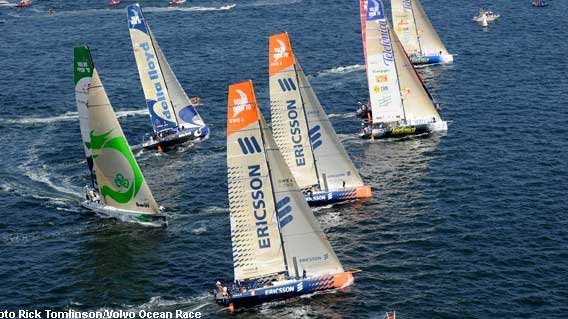 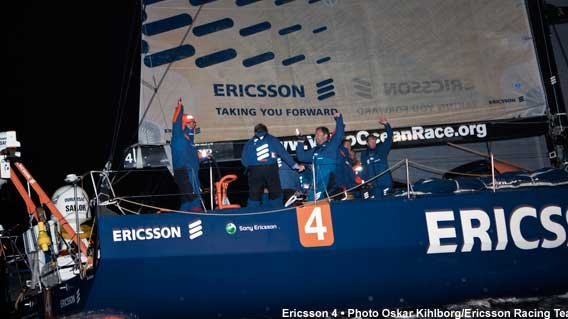 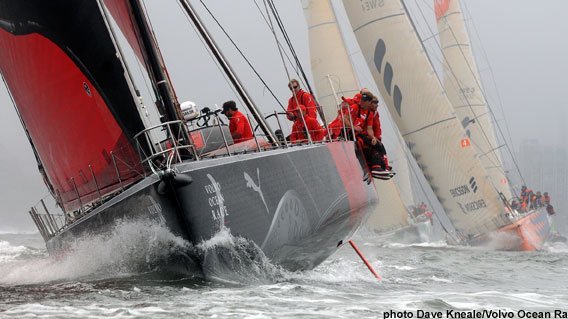