Skandia beaten by one hour seven minutes up the Derwent River 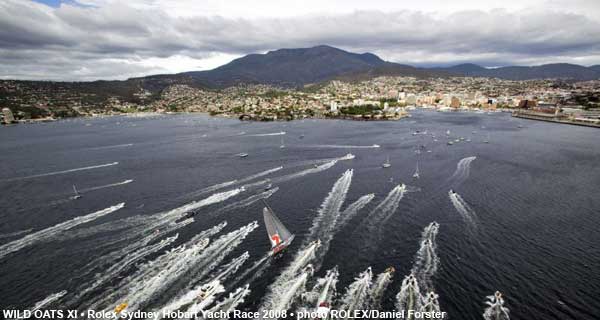 Wild Oats XI strode majestically up the Derwent River this morning to beat Skandia by one hour seven minutes and score a record Record #sailingrecord fourth consecutive line honours victory in the Rolex Sydney Hobart after one of the best tactical battles seen at the head of the fleet in the race’s 64-year history.

Lighter winds off the Tasmanian coast in the last 18 hours of the race robbed Wild Oats XI of the chance of beating the race record Record #sailingrecord she set in 2005 at one day 18 hours 40 minutes and ten seconds. The drop in wind strength did give Mark Richards and crew the opportunity to make use of Wild Oats XI’s bigger wardrobe of headsails to catch and pass Skandia, which had led her with better speed and sound tactics for the first 22 hours.

Both maxis were built to meet the race’s 30m maximum overall length limit and have the CBTF (canting ballast, twin foil Foil #foil ) underwater appendage configuration. But the Don Jones-designed Skandia, owned by the talented young Mornington (Victoria/AUS) skipper Grant Wharington, is four years older and is a leaner programme than Wild Oats XI, a Reichel/Pugh design owned by Bob Oatley of Sydney.

Wharington decided to race with a reduced wardrobe of headsails and fewer crew -18 compared to Wild Oats’ 24 - to save weight. In the fresh running conditions after the start, the more lightly loaded Skandia was faster running under big asymmetric spinnakers. With some smart tactical calls and the help of favourable current from an eddy off the south coast of New South Wales, Skandia gained a narrow lead overnight and held it across Bass Strait as the northerly gradient wind re-asserted on Saturday.

The fairy tale was not to last. Last evening as the maxis closed on the Tasmanian coast, both slowed as conditions calmed. In the tricky light transitional breezes that followed, Wild Oats’ light-air reaching headsails came into play. She was first into the new breeze from the northwest and within an hour was doing 7-5 knots to Skandia’s 2.5 knots. In the small hours, Wild Oats XI converted her speed advantage into a handy lead of 14.6 nm as she rounded Tasman Island, 41 nm from the finish. From there she sailed conservatively, finishing with two reefs in the mainsail as the winds freshened to 28 knots and gusted sharply during the final beat up the Derwent.

Conceivably, Wild Oats XI may have been slowed over the first part of the race by picking up underwater debris on her keel in the early stages. Tactician/helmsman Iain Murray said the boat seemed faster after it stopped and reversed to free a two-metre shark caught on its aft steering rudder around 2100 AEDT on Saturday night and helm, Mark Richards confirmed that everything felt better after clearing the unfortunate shark.

The crews of Skandia and Wild Oats XI agreed dockside that the race was the highest calibre they had experienced in maxis. Wharington commented shortly after the finish that, "it was really great to be racing on the same bit of water and race them boat for boat. Tactically we sailed a really good race ; the crew did a fantastic job, I don’t think we would have done anything differently. We found we were faster than them in the fresh running conditions. Keeping the boat light obviously worked really well for us." Wharington was quick to recognise the balance of power was not in his favour, continuing, "they’ve got twice as many sails. On the first afternoon we put up our A2 spinnaker and pulled it down 24 hours later and we watched them do seven sail changes before dark the first night. We’ve only got seven sails on the boat. I think they have 18 !" Wharington agreed that not having more light air sails eventually told off the Tasmanian coast, but he also pointed out that having more sails meant more work.

Mark Richards agreed, explaining the 50 or more sail changes the Wild Oats XI crew had to make over the course of the race were physically stressful on his crew : "It was very, very difficult for us. Most teams would have probably fallen apart. We sat down and had a good crew talk during the race just to make sure we could hold it together and we did. The boys did a fantastic job, with all the sail changing and stuff and that’s what got us there in the end."

Bob Oatley, who is 80 and unable to race any more after a long history of owning and sailing on a series of successful offshore racing boats, was overjoyed as he watched Wild Oats XI finish, "It’s just one fantastic thrill ; I can’t describe it other than that really," he said. "The record Record #sailingrecord books ? I don’t care much about them. It’s the thrill of doing it, wonderful."

Pressed on whether Wild Oats would go for a fifth consecutive line honours in 2009, Oatley was coy, asking that his crew be allowed to enjoy the success and efforts of this year, without worrying about the next. Asked whether he would he build another boat ? His answer was much more succinct, "no, if I built another one it would be identical to this one and so what’s the point ?" With Wild Oats XI undefeated in its quest for line honours at the Rolex Sydney Hobart over four years of racing, Oatley’s view seems hard to challenge.

The race for overall victory is still on. At 1530 AEDT twelve yachts had finished, with Bob Steel’s TP52 Quest currently lying in first place on handicap. The countdown clock is ticking and whilst Steel and his crew look to have few threats, their prospects will become clearer with each passing hour.

Of the 100 yachts that started on 26 December, three have retired (Georgia, Sanyo Maris and Inner Circle) and twelve have finished. The first foreign yacht expected home is Chris Welsh’s Ragtime (USA), due in some time this evening.

The 100-boat fleet that started the 64th Rolex Sydney Hobart has crews representing the USA, UK, New Zealand, France, Germany, the Netherlands, Switzerland, Russia and New Caledonia as well as every Australian state.

For more information about the Rolex Sydney Hobart 2008 including the entry list, yacht tracker and results please visit the event website www.rolexsydneyhobart.com 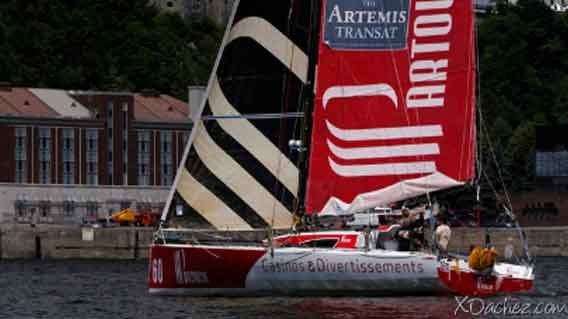 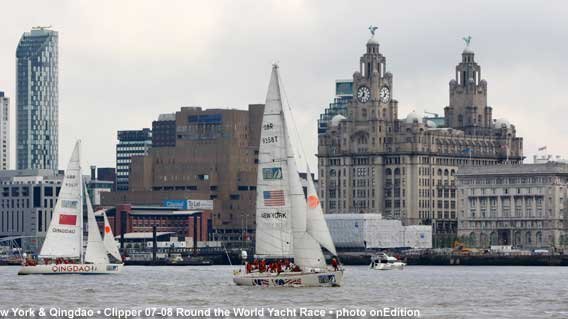 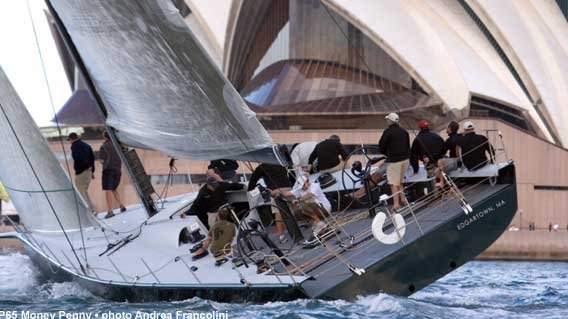