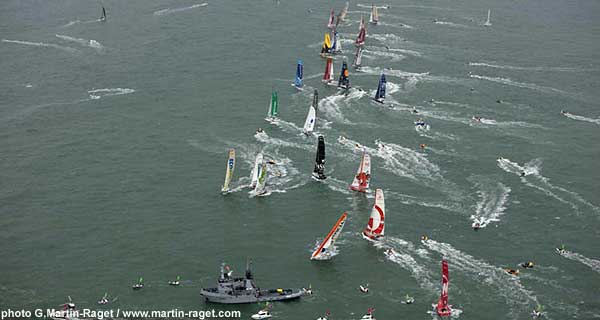 Every vantage point along the canal from the haven of Les Sables d’Olonne port to the sea was jammed deep with tens of thousands of well wishers. There were tears on the dockside as lines were slipped, dozens and dozens of messages along the long stretch of sea walls that funnel the record Record #sailingrecord sized fleet to sea - some simple direct and personal to the generic ‘Yes We Can. It was everything that makes the Vendée Globe a truly unique experience. More than 300,000 people bid the 30 skippers on their way.

The record Record #sailingrecord sized fleet of 30 boats answered the start gun at 1302hrs (local time/1202GMT) under grey, threatening skies with an awkward swell and 13-18 knots of breeze, with the knowledge that winds of up to 45 knots await them. Mike Golding on Ecover crossed the start line too early for the opening of his third Vendée Globe and the British skipper had to restart and found himself playing catch up. Michel Desjoyeaux on Foncia, considered one of the favourites, was also slow off the start line. Both were no doubt equally frustrated, but while the magnitude of the fleet and the early pace, is that of an inshore regatta, they have more than 26,000 miles and some three months to catch up.

Dee Caffari, setting out on her first solo round the world race, made a solid, simple well timed start on Aviva and was up with the leading group through the first hour of the race, while Seb Josse on BT was calculated as the early leader on the first of hundreds of official race standings, pegged level with Marc Guillemot on Safran.

The two Swiss skippers Dominic Wavre on Temenos and Velux 5 Oceans Velux 5 Oceans #Velux5Oceans race winner Bernard Stamm on Cheminées Poujoulat were alongside each other until Wavre had to take the tough decision to inform the race office just two hours after the start that he was returning to Les Sables d’Olonne with a problem with his electrical charging system. Steve White, skipper of Toe in the Water, worked late into his last night and was still frantically stowing equipment as Caffari lead off the dock a two hour long Open 60 dock out procession.

On the early showings Alex Thomson had put his three weeks of stress and problems behind him on Hugo Boss and was up in seventh place, while Brian Thompson on Bahrain Team Pindar lay 12th with Caffari 13th.

Leaving the dockside they said :

Dee Caffari, Aviva : “I’m okay, I think the forecast for the first 48 hours is kind of distracting me a bit. It’s a mental start though isn’t it !”

Steve White, Toe in the Water : I didn’t get to bed until 2am because we were still fiddling around down here. I had to sort out all my spares and bits of pieces, but I slept like a log ! It was quite bizarre to be waved through the streets by a policeman, through all the roadblocks. I’m probably exhausted so for the first few hours I need to just point the boat wherever it’s pointing at, and get a couple of hours kip I think, and then I’ll be good to go !

Mike Golding, Ecover 3 : It doesn’t feel any different to any others, it’s just as nerve-wracking and frightening. You can’t help but feeling like a condemned man walking down the dock as everyone’s being so nice to you. But it’s an extraordinary feeling here in Les Sables d’Olonne. I was up quite early and looking out over the beach the cars were already parking up to watch the start, it’s just an extraordinary atmosphere. I think it is amazing, it’s amazing to see sailing with such a high profile with such a lot of strong support from the public. It’s something as an Anglo Saxon and British sailor we’re not used to seeing, and so it is really lovely to have that feeling when you’re here in France The Vendée Globe is a very special event no doubt but this one’s exceptional. With 30 boats, 30 good sailors, seven Brits — it is an amazing event.

Alex Thomson, Hugo Boss : “It’s always going to be emotional this bit, but grin and bear it.”

Brian Thompson, Bahrain Team Pindar : “ I’m looking forward to starting the race and really looking forward to coming back to Les Sables in 3 months because I’ve really grown to love it here.” “The weather’s fairly ok - Big seas at the start but not too much wind, say 10-15 knots, which is great to get everyone away safely. More wind tonight and then more wind tonight and tomorrow a lot of wind – 45 knots. Just yesterday we did a lot of painting on top of the roof, all the team came and put their handprints on the side in different colours and wrote messages, and all the family were down doing baby footprints and handprints. And I’ve got lots of photos on board, so it’ll be great when I’m lying here on my bean bag to look up and see it all above me.”

Rich Wilson, Great American III : “ I’ve got a few butterflies in the stomach this morning, but I’ve been working towards this a long time so once we get going I think it’ll be okay. There’s a lot of wind in the first couple of days, so if everyone gets through that ok it’ll be time to start heading south to the warmth. I slept for about four hours until it started to blow and rain and I started to imagine what will be happening.” 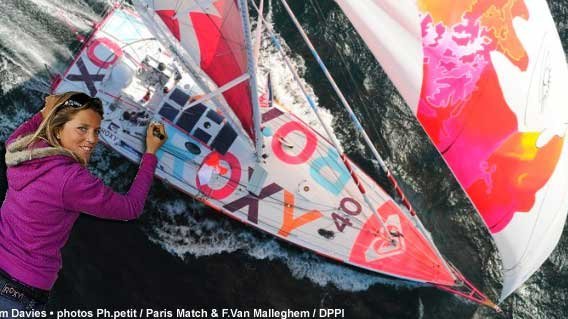 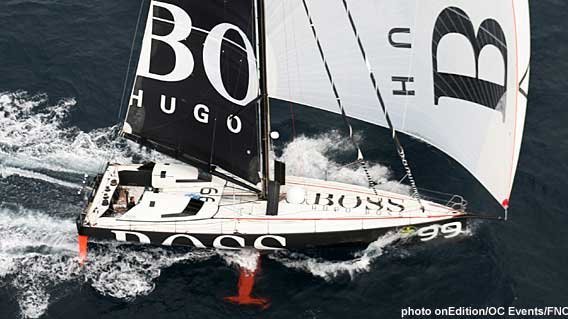 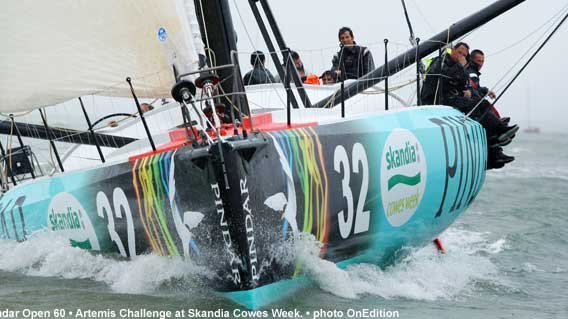 The Artemis Transat : Class40 highlights of the 2008 Transat 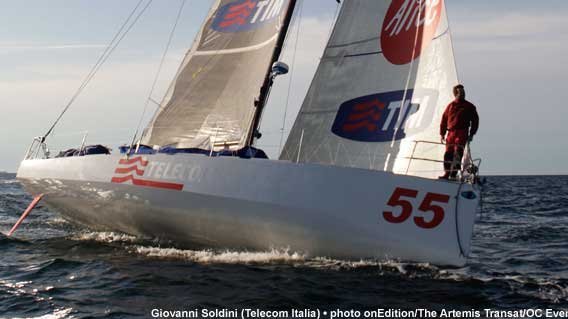