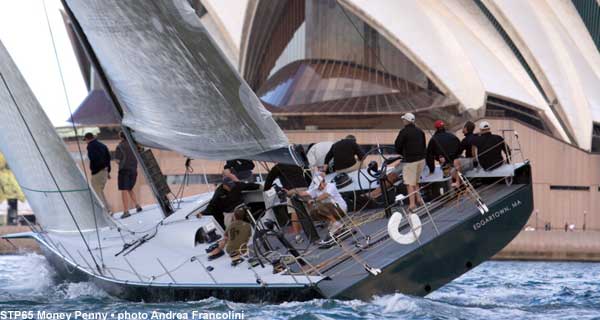 The newest STP65, Moneypenny, designed by Reichel/Pugh and built by McConaghy’s Boat Yard in Australia, was launched the second week of April and has tested in Sydney Harbor with "fine results," according to its owner Jim Swartz (San Francisco, Calif.). "It feels very nimble," he grinned, clearly pleased that the rocket ship performance conceptualized in the development of the STP65 Box Rule looks to be as much a reality for him as it has been for Roger Sturgeon (Fort Lauderdale, Fla.), who now has a season’s worth of trophies to add to his shelf since the June 2007 launching of the first STP65, the Farr-designed Rosebud.

"It’s going to be really exciting," said Swartz about his coming match-up with Rosebud this summer in Newport, R.I., when the boats will participate in the New York Yacht Club Annual Regatta presented by Rolex before setting off in the famously testing Newport to Bermuda Race. "There are a lot of people around the world watching this closely," he added, explaining that the STP65 rule and class, jointly developed by the Storm Trysail Club and the Transpacific Yacht Club, will transfer to an owner’s association for administration once there are five boats built.

The third boat due to launch is Udo Schutz’s (Selters, Germany) Container, which is under construction at Knierim Boatyard in Kiel, Germany. As of March, the hull and most of the interior structure had been finished, and the lamination of the deck had started. Container should be delivered to its owner by the end of June, with the first race scheduled to be Spain’s Copa del Rey regatta in late July.

"We have big shoes to fill," said Swartz about the trail he, Sturgeon and Schutz are blazing for up to a half-dozen other owners who are rumored to be considering building STP65s. "This is about not only being competitive offshore against other purpose-built IRC boats of similar size (the Judel-Vrolijk 66’ Numbers and the soon-to-be launched Reichel Pugh 69 Belle Mente come to mind), but also something more—a boat that can sail inshore as well, in a strong one-design class without becoming obsolete after a few years."

According to the class web site, the Box Rule’s "speed producing facets, such as construction, length, displacement, draft, VCG and sail area, are controlled," which means that as the class grows, the STP65s can begin racing within the box without time allowance, effectively as one-designs.

Swartz has plenty of experience in one-design sailing, having successfully campaigned a Melges 32 in addition to his Swan 601, also named Moneypenny. With the STP65 class stipulating an Owner/Category1 Driver, Swartz most assuredly will be at the helm of the STP65 Moneypenny. He also will continue to sail with many of his long-time crew from the Swan 601, including such notable names as Gavin Brady, Paul Cayard, Ken Keefe, Kimo Worthington, Mike Toppa, Mark Rudiger, Ben Beer, Matt Ciesicki, Larry Miliak and John von Schwarz. In addition, a number of veterans from the BMW Oracle America’s Cup America's Cup #AmericasCup team have signed on, including David Blanchfield, David Brooke, Rodney Daniel, Jamie Gale and John Ziskind.

The STP65 rule, bylaws and other supporting information can be found at www.stp-65.org.