Mascalzone Latino Makes it Three World Titles in a Row

Vincenzo Onorato : "Driving was a lot of stress for me" 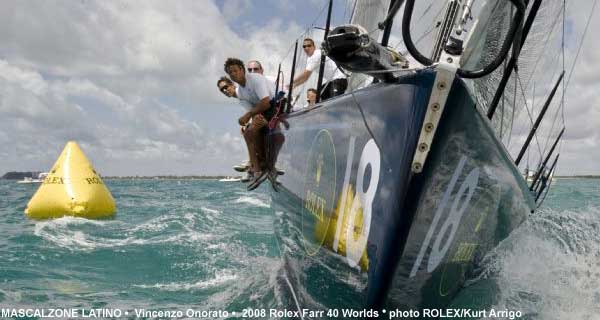 "As I told my crew before the start, it is quite impossible to do," said Onorato of winning again. "But we did it, thank God. It was a tough week." What makes this accomplishment even more remarkable is that Onorato had not one, but two substitutes for regular tactician Adrian Stead in Morgan Larson and John Kostecki.

"It is incredible for a good reason," said Onorato who has competed in the Farr 40s since the class’s early days. "Driving was a lot of stress for me ; I had to tune up with another guy each day. John is an incredible talent. To be able to tune up with a guy like him is fantastic."

Arriving on the dock the moment Mascalzone departed for the first race of the 10-race series, Morgan Larson assisted in the team’s 3-12-1 results that put them into first overall. When Kostecki joined the team the next day, he admitted there was considerable pressure maintaining the standard set before him.

"In such a situation we lost Adrian Stead for a good reason," said Onorato of Stead who rushed home the day before the regatta for the birth of his first child. Kostecki continued the winning form and helped keep the team at the top of the standings each day, posting all top 10 scores except for a 14th in his first race as tactician.

Early this morning Peter "Luigi" Reggio and the Storm Trysail Club’s race committee had their work cut out for them. After yesterday’s frustrating multiple general recall situations in very light and shifty conditions, the weather outlook was less than encouraging. Light shifty wind - 6-7 knots - might have been enough to start a race, but what Luigi really wanted was a building sea breeze.

The day initially lined up as an all-Italian battle pitting defending champion Mascalzone Latino (ITA), the leader of the series since the first race, against Joe Fly (ITA), the second-place, well-sailed boat. In reality Barking Mad (USA) became part of the winner’s fate when it was fouled by Joe Fly during the first mark rounding of race nine (Saturday’s first race). Mascalzone rounded in the same group and filed a protest against Joe Fly.

Barking Mad tactician Terry Hutchinson explained, "From my perspective, we were fouled by Joe Fly at the top mark. We did not protest them because we did not want to be... It is tough racing, It’s hard enough. You get into these situations and I think Mascalzone and Joe Fly were having a good regatta against each other. Mascalzone Latino witnessed the infringement (against Barking Mad) and they were within their rights to file a third party against them in the situation. That leaves the umpires to decide the decision."

In the end, the international jury - chaired by Tom Ehman - decided in Mascalzone’s favor and disqualified Joe Fly, giving the win to Mascalzone, and dropping Joe Fly to second overall for the championship.

The race was won by Ramrod (USA), which finished in 7th overall and is the top American boat. "It’s great to finish in the top 10," said owner/helmsman Rod Jabin (Annapolis, Md.) "We achieved all our objectives, which was to win a race and get in the top 10. I couldn’t be happier really."

This was his team’s second world championship, having competed in the 2006 Rolex Farr 40 Worlds in Newport, R.I. "I’m around some solid teams," he said of the standings. "After the first race we were in the top five, and you know, we were a little disappointed that last race didn’t go our way. It’s an awesome result for us.

"Where I think we made the most improvement is the transitional sailing, shifting from light to medium wind," said Jabin. "Our work with Gavin (Brady, the tactician), Simon (Minipro, the main trimmer) and Joe (Gibson) — our speed team - allowed us to transition through the soft spots to more pressure to me controlling the speed. We always thought we had good speed. It was really challenging to figure out which way to go."

The day’s second race was won by Wolfgang Stolz’ Opus One (GER), which finished the regatta in 9th overall. Although many were wondering if that race would turn into a match race between Mascalzone and Joe Fly, it was in fact more of a split race as the teams took opposite sides of the race course, yet staying in the top 10 of the fleet.

Peter de Ridder’s Mean Machine (MON) turned in a 2-17 today to finish in third place overall, while HRH Crown Prince Frederik had his best results on NANOQ (DEN) with a 3-4 to finish in fourth overall.

Rounding out the top 10 were Calvi Network (ITA), Carlo Alberini’s entry in fifth place overall. "What a shame we had to count the second day," said Alberini. "If it was not for that we could end even higher than fifth. Anyway a bad day can always be at the doorstep, but the team and its determination proved able to overcome it successfully, and we ended up among the best of the teams. My compliments go to my countrymen."

Barking Mad (USA), Jim Richardson’s two-time world champion, finished in eighth. "It was a very, very light and pretty shifty day," said Richardson (Boston, Mass./Newport, R.I.). "The conditions were challenging and we didn’t meet the challenge of our boat. We weren’t going well. We had some good starts and we were up there at the beginning, but we didn’t finish up there. Every time we seemed to be on the right, the left paid off. It was frustrating to get good starts and all of a sudden not be in a good position."

Richardson not only helms his boat, but he is at the helm of the Farr 40 Class as president. "This has been a great world championship," he said. "It’s been a terrific venue and everyone is happy to meet after the races. The cordiality of the event has been very high, and the sailing has been challenging and it’s been fair. There were a lot of different race winners and a lot of different people had success."

Next year, the Class will travel to Europe to Porto Cervo, Sardinia for the 2009 Rolex Farr 40 World Championship. "Next year we return to the Yacht Club Costa Smeralda," said Richardson. "It’s one of the really beautiful jewels of the sailing world. It’s a fabulous yacht club in a beautiful setting. I’m sure they’ll do a great job for us as they usually do. Hopefully the wind will be more stable than here, and we’re thrilled to be going back there." 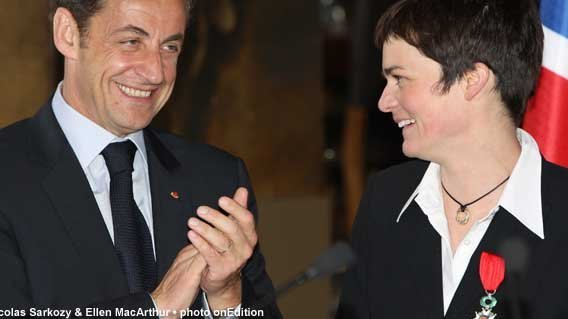 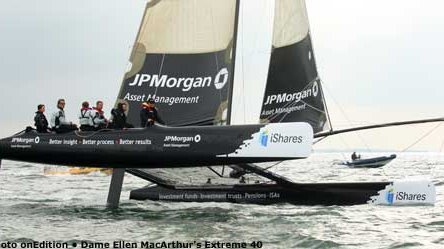