With an elapsed time of 1 day, 20 hours, 18 minutes, the Bruce Farr-designed ICAP Leopard (GBR) chopped just under 9 hours off the record Record #sailingrecord set by Ross Field on the 80-foot RF Yachting. Wind was southwest at 10-15 knots as the boat finished in a light rain and reduced visibility.

Only 10 miles behind was George David’s 90-foot Rambler (USA), finishing at 09h 43m 21sec and also well within the previous record Record #sailingrecord time. She currently leads the fleet overall on corrected time.

Dockside in Plymouth, Slade was presented with a Rolex Yachtmaster timepiece in steel and platinum and the Erroll Bruce Cup for his Line Honours win by Lionel Schurch of Rolex SA and RORC Commodore David Aisher.

ICAP Leopard was launched in June 2007 and was sailing in only its first proper offshore race. Slade recounted a great race with the first day match-racing match-racing #MatchRacing out of the Solent and along the coast with Neville Crichton’s Alfa Romeo (NZL) in 25 - 30 knots (with Alfa later retiring from the race). Recalling the awaited match-up between the two similar length super maxis, Slade said, "You’re always looking over your shoulder. The race against Neville would have been a heck of a struggle, even though the conditions and point of sail favoured us.But to have his old boat (Rambler is the former Shockwave/Alfa Romeo) come and pip us would have been hard to forgive."

Slade said the worst of the weather was off the Lizard where, "we saw 40 knots, more in the gusts.it’s at night, and it’s hard to gauge the seas." He continued, "But the boat is very solid, you put water (ballast) in the back and lift the bow.it’s like a Volvo 70 stretched out to 100 feet. We never had to back off, on the contrary, you can push the boat."

ICAP Leopard had a few dramas during the race including a genoa that fell out of the track, dragging overboard when they were off Portland Bill, and later halfway up to the rock the boat hit a shark, which then hung up on the rudder and required a plucky Australian crewmember to go into the water to free it. Next was an oil pressure valve that shut down and left the boat briefly without hydraulics.

Leopard will be shipped to Australia/New Zealand in September in preparation for the Rolex Sydney Hobart Yacht Race. Before that time the boat will undergo some modifications to lighten up the boat - built as a charter boat capable of racing competitively, the boat is 40 tons, considerably heavier than a straight-out race boat such as Alfa Romeo at 28 tons.

Second over the line this morning was the Reichel-Pugh 90-footer, Rambler. Owner George David clearly enjoyed his first Rolex Fastnet Race, attributing their well-sailed performance to the fact that "the boat is very well crewed with 19 onboard, and everybody is very capable." David bought the boat last fall and it went through a refit including some modifications to the keel, bulb and bowsprit which all seemed to have worked as the boat has had a winning season so far.

Skipper Ken Read assembled a first-class crew of professionals including some half dozen VOR hopefuls who are onboard as a tryout. After rounding the Fastnet Rock yesterday evening, Rambler reveled in 17 - 26 knots, power reaching back to the Lizard where they turned the corner and had a spinnaker run nearing the finish. While the conditions after Lizard Point were slightly more moderate than expected, they managed to rip two spinnakers and the mainsail, one spinnaker as they came down a wave and powered the boat into the wave ahead, blowing the tack out.

As of the latest OC Tracker position update at 1130 BST, leading on corrected time are Rambler (USA) in IRC Super Zero and Overall ; Chieftain (IRL) in IRC SZ Canting Keel ; Desperado of Cowes (GBR) in IRC Zero ; Scarlet Oyster (GBR) in IRC 1 ; Foggy Dew (FRA) in IRC 2 ; Tigo IV (GBR) in IRC 3, and PRB, in the Open 60 class, which was due over the finish line at approximately 1300 BST.

As of Wednesday at 1200 BST, 191 yachts have retired from the race, and 80 yachts are still racing. Current weather conditions at the Fastnet Rock are northwesterly winds at 25 knots and rough seas. 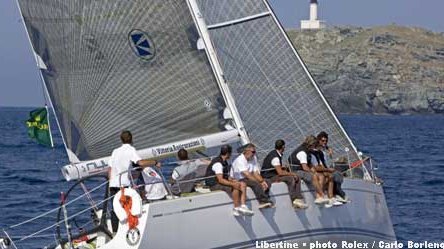 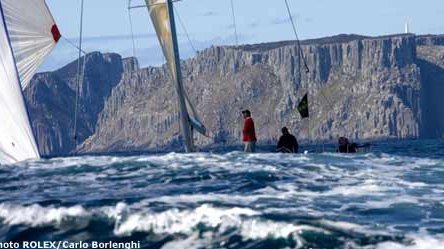 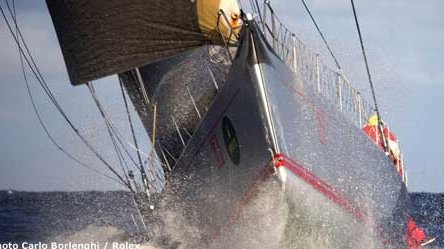 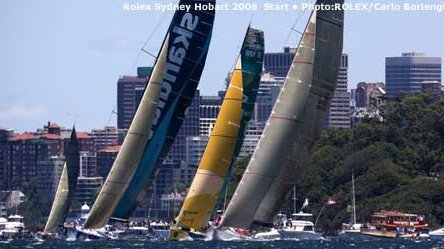