Estrella Damm, Spain’s most important brewer, has announced today that it will sponsor the first Spanish entry in the Barcelona World Race Barcelona World Race #barcelonaworldrace 2007,and they have chosen the Catalan Guillermo Altadill, one of the most respected and experienced professional sailors in the world, to skipper Estrella Damm’s boat over three months across the planet’s most hostile and challenging oceans.

The Barcelona World Race Barcelona World Race #barcelonaworldrace will start in Barcelona on the 11th November and for the first time will see the best professional sailors from both solo and fully crewed disciplines competing against each other in teams of two, in high performance Open 60 monohulls, non-stop until they return to Barcelona.

Created in 1876, Estrella Damm is the beer of choice in Spain and the company, who already supports the Emirates Team New Zealand America’s Cup America's Cup #AmericasCup team, will be pushing the boundaries of their association with the sport of sailing in supporting this new ocean racing team. Estrella Damm epitomises the value of success, happiness and comradeship and has become a social icon in its country with a long tradition of embracing change, but never forgetting their tradition, as thousands of ideas have culminated in thousands of hopes.

“The deal between Estrella Damm and the Barcelona World Race Barcelona World Race #barcelonaworldrace encompasses our commitment to the City of Barcelona which has been a long-standing tradition by the brewer. Besides, this new challenge upholds the target of perpetuating the brand Estrella Damm with the best international sporting events. In 1992 Damm was the first brewer sponsoring Sponsoring #Sponsoring the Olympic Games, and recently the company has sponsored the 32nd America’s Cup America's Cup #AmericasCup with the Emirates Team New Zealand and Desafio Español team,” commented Enric Crous, General Director of Damm Group.

“And now Estrella Damm will sponsor for the first time a boat that will compete against the best professional sailors in teams of two. During three months, the navigators will sail 25.000 miles throught the most difficult and unsheltered oceans of the world in the latest generation IMOCA Imoca #IMOCA Open 60 monohulls,” concluded Crous.

With Catalan skipper Guillermo Altadill, the campaign will benefit from a skipper born and bred in Barcelona who has circumnavigated the world an incredible six times. Altadill, a father of four, aged 45, has competed in two Volvo Ocean Races (2005/06 onboard Team Ericsson and 2001/02 onboard Assa Abloy), two Whitbread Round the World Races, The Race onboard ‘Club Med’ and was part of the crew that raced around the world on Cheyenne in 2004. Hehas 18 transatlantic crossings and six circumnavigations under his belt so far. He has been the Spanish champion in the Soling class and Tornado class and coached the Olympic gold medallist in Atlanta in 1996 in the Tornado class. Most recently, he was part of the German America’s Cup team, United Internet Team Germany.

“It is a great day for us to announce Estrella Damm as sponsor of our entry in the Barcelona World Race. Already for me the race is very special as it will start and finish from my ‘home town’ of Barcelona and now with Estrella Damm we have a great Spanish brand to support us. I am really looking forward to racing around the world short-handed. I have always been part of much bigger crews so this is a major challenge for me to do this race with just one other person – it will be a real test for me. A big part of this race is how we will manage together, to race at 100%, but first you must finish. Racing around the world is not just about speed, it is about minimising equipment failure, it is about survival, it is about knowing when to hold back and when to push. It will be a very, very competitive race but we aim to do our best for everyone who supports us and for Estrella Damm,” explained Guillermo Altadill.

British sailor Neal McDonald is joining the Estrella Damm Sailing Team as Performance Technical Manager from now until the start of the Barcelona World Race. McDonald brings extensive experience to the team with his background in offshore racing at the very highest level. The team is in discussion with top-level offshore skippers and an announcement will be made in due course to confirm the co-skipper.

The Estrella Damm IMOCA Open 60 has been built by the Offshore Challenges Sailing Team, who are responsible for Ellen MacArthur’s record breaking voyages, and who will manage this race campaign. The monohull is a Farr design, sistership to Jeremie Beyou’s Delta Dore, also a competitor in the Barcelona World Race. The boat took eight months to build taking approximately 22,000 hours of labour.

Estrella Damm is the only beer brewed in Spain. The origin of the brand is anchored in the heart of Barcelona where August Kuentzmann Damm, 131 years ago, created the first factory. This old factory, home to the actual site of the company, was operating until 1992, then all production was moved to El Prat de Llobregat de Barcelona to increase its production capacity and mordernise the elaborate process of the brewery. 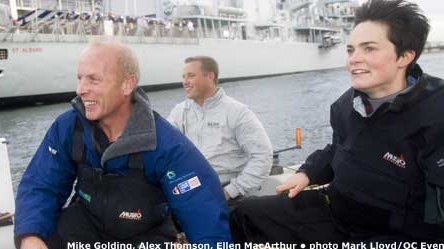