Extreme 40 events to be called ‘The iShares Cup’

Four premium events will take place in Germany, France, the Netherlands and the UK 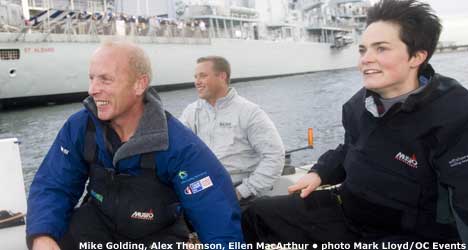 At the Collins Stewart London Boat Show today iShares, the world’s leader in Exchange Traded Funds, confirmed their sponsorship of a new and exciting European sailing series for the Extreme 40 catamaran class. ‘The iShares Cup’ will consist of four premium European grand prix style sailing regattas to be hosted in Germany, France, the Netherlands and the UK providing a solid foundation for this Class to move forward in 2007 and beyond.

Rick Andrews Head of iShares Marketing Europe, commented : “This is a fantastic opportunity for iShares ; a new innovative platform that complements our brand values and offers exciting client entertainment experiences across Europe.”

The four premium European events for ‘The iShares Cup’ will take place between May to October 2007 [dates will be confirmed once final venue negotiations have been completed]. Host cities include Munich [Germany] and Amsterdam [Holland], plus a venue on the south coast of France and on the Solent in the UK. OC Events, part of OC Group jointly owned by Dame Ellen MacArthur and Mark Turner, will be responsible for organising the new circuit : “We joined forces with TornadoSport, the creators of the Class back in October 2006, and it is great to be able to announce a major Title Sponsor to the new European circuit at this stage,” commented Mark Turner, CEO of OC Group. “There is still a lot of work to be done to ensure that this circuit reaches it full potential. iShares has made a major commitment to the Class to take it to the next level of commercial and competitive success.”

There are currently five Extreme 40 catamarans planning to compete in 2007 - Team Basilica, Conrad Humphreys Racing and Holmatro, who competed in the inaugural 2005/06 race season. These teams will be joined by Team Denmark (ex-Tommy Hilfiger) and a new team soon to be confirmed. In addition, the Extreme 40 class manufacturer, TornadoSport, is planning the production of up to five new boats in time for the start of the 2007 race season, bringing the total number of potential competing boats to 10.

The four iShares Cup events will form the core of the European season, and shall be complimented by some other one-off events that might take the fleet to Italy, Spain, Sweden and Switzerland.

Created two years ago the Extreme 40 is the ultimate grand prix racing sailboat. At 40ft long, this lightweight carbon fibre catamaran has already shown its ability to provide exciting sailing, very close to the shore, offering a ‘grandstand’ sport for spectators and a unique B2B experience for guests. Designed by Yves Loday, in collaboration with Olympic Tornado sailors Mitch Booth and Herbert Dercksen of TornadoSport, the boat is normally sailed by four professional crew with a fifth VIP ‘guest spot’ available - even in the full pressure races ! The boats can reach exhilarating speeds of up to 35 knots in the right breeze and flat water – and yet even in just 8 knots of wind provide a great ride ‘flying’ on one hull. The fact that the catamaran can be easily packed into a standard 40-foot container completes the concept of a highly flexible B2B platform that is also a top class racing yacht.

The Extreme 40 Sailing Series for ‘The iShares Cup’ will be raced over a three-day format with one set-up day and one pre-regatta warm-up day. Each race day will include a session of ‘informal’ racing for the teams to take their all-important VIP and media guests out racing, and then a series of three to five windward/leeward courses raced daily that count towards ‘The iShares Cup’. On-water judging will be implemented for the first time so no post-racing protests to complicate proceedings – ‘first past the post’ wins !

One of the leading factors contributing to the success of Extreme 40 racing is its natural spectator-friendly format combined with huge media appeal. “The Extreme 40s are all action !” commented Ellen MacArthur, co-owner of OC Group. “They are hugely challenging and fun for the sailors to race, they look impressive, and spectators can get a real buzz from watching these machines race so close to shore.” The Extreme 40 boats are also capable of racing over longer distances and it is planned that the fleet will race at other stand-alone events throughout 2007 : “I raced onboard Team Basilica in last year’s Round the Island Race – which is 55 miles of offshore racing around the Isle of Wight – and it was just one huge blast,” claimed round the world yachtswoman Dee Caffari. “This kind of racing appeals to the high-performance dinghy class sailor as well as multihull sailors or keelboat sailors like myself.”