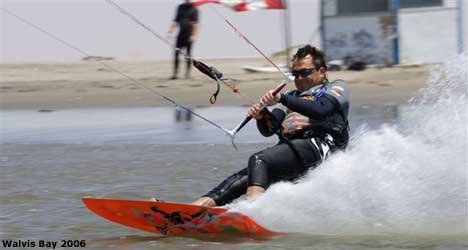 Following the famous Walvis Bay Speedweek, which serverd again as the final event of the ISA Speedsurfing Grand Prix Tour, the courses over 500m and the nautical mile were re-opened for 20 competitors from 12 nations. Alongside breaking new records, the big goal was the chase for the 50 knots barrier, which is THE magical number in speedsailing all around the world.

Although this big goal was not reached, nearly everybody went back home with a new record Record #sailingrecord or at least a new pesonal best.

Big expectations have been set into these four weeks from the 26th of October until the 23rd of November, especially because of the lack of wind during the two weeks before the start of the record Record #sailingrecord attempt. The last big winds were reported from beginning of October, when local Kiteboarder Juergen Geiger unofficially went down the 500m strip with 44 knots, more than two knots faster than the existing kitespeed world record.

But this is part of the game ; almost no wind during the speedweek, allowing for only one valid round, and the waiting game continued just with the official start of the record attempt.

During the first days, the new 500m strip in the "salinas", a big saltwater pond belonging to the Walvis Bay Salt Refiners, one of the worlds biggest sea salt producers, was inspected and some additional adjustments on the course were made. Due to the fact that this course is only intended to work in strong winds with southerly directions, the hope to use this course during the next days was only marginal, as the weather forecast only predicted winds between 20 and 25 knots.

So the focus of the competitors was turned to the natural sandbar again, to attack the existing nautical mile records. The course was already setup and everything was ready for the first winds hitting Walvis Bay.

First competition day was the 30th of October then, with winds around 25 knots average. Already enough for speeds almost reaching 40 knots ; not enough for a new world record, but Morten Knutsen (NOR, JP, Neil Pryde) and Alain de Gendt (BEL, F2, North) set new national records for their countries. Nine more national records were broken on this day, but it shouldn’t be the last day on the mile course !

The next day brought again wind conditions around 25 knots average, but a better angle of the wind and spring low tide in the late afternoon, which gave a perfect arena for the mile again. The speeds increased during the whole day, seeing Hennie Bredenkamp (RSA, Fanatic, Naish) in the lead almost all of the time. Hennie was the first person ever clocking a speed over 40 knots over the mile, and he did it several times. The only rider able to follow him was Bjorn Dunkerbeck (ESP, T1, North), and both of them were clocking speeds around 40.3 knots, with Hennie always closely in the lead. Both Hennie and Bjorn were riding prodcution boards, available for everyone in shops worldwide.

At 10 minutes to five Bjorn changed back to his custom speedboards, and at 17:03 he was flying down the course with a speed of 41.14 knots, more than one knot over the previous record and the only person ever over 41 knots on this distance. Hennie is keeping the credentials to be the first man ever over 40 knots, and now holding the production world record.

For the womens record it was a close battle between Zara Davis (GBR, T1, Gaastra) and Maaike Kallenborn (NED, F2, Naish). Both ladies were beating the old record by far, and in the end Zara was a little bit faster on her custom Thommen than Maaike on production F2 Missile XS. So zara snatched the outright record, but Maaike can take comfort with the production world record.

The four participating Kitesurfers also battled for a new world record, seeing Rob Munro (GBR, Naish, Cape Doctor) in the lead in front of Nigel Bowley (GBR, Naish) by only 0.07 knots, and both faster than the old record. Juergen Geiger (NAM, North) and Manu Taub (FRA, Naish, EXA) also set new personal bests, but were not able to follow the british guys on that day.

As the weather forecast was still predicting only low winds, the call was again for the sandbar, this time for the 500m course. The salinas were still on hold for the big days everybody hoped for.

The 500m course was opened then from the 2nd to the 4th of November, with the best day on the 3rd. The wind again averaging 25 knots, gusting 35, which means normally a "normal day" in Walvis bay. Unfortunately, this year it was one of the strongest days in the whole record attempt period.

The weather pattern was generally quite strange for this time of the year, which is normally the best wind period. With winds reaching 25 knots average every second day and 35 knots average at least once per week, this would have been the time to break records, and with the strong winds turning very southerly the salinas with a shifted angle of 45 degree compared to the sandbar would have been perfect. But the wind flow was very westerly during the complete month, due to heavy rainfall in the desert which confused the whole weather system. So we had to take what we were presented, but luckily this strong westerly influence allowed for good conditions on the sandbar.

On the 500m course, the wind was never strong enough to endanger the existing records, but perfect for training and several national records. Zara Davis, Nigel Bowley (with 41.38 knots the second fastest kite speed ever, and close to the world record) and Morten Knutsen were able to improve the national records, and several personal best speeds were reached by the other competitors.

The top speed of this period was set by Dave White, who was able to beat both of his biggest opponents in this event, Bjorn Dunkerbeck and Hennie Bredenkamp. 42.91 knots is the fastest speed ever achieved on a production board in open water and quite impressive for the prevailing wind conditions.

Then the waiting game began again, and it should be a long period this time... The competitors enjoyed themselves in the meantime with some low wind freesailing, paragliding, shark fishing etc. But after a while, all these alternative activities become boring, and everybody was keen to go on the water again.

After two weeks of waiting with only some training sessions, the wind kicked in again surprisingly on the 20th of November, when nearly everyone already lost his hope. Again only 25 knots average, but the course was moved up by 50m due to the experiences from the racing days before. A lot of GPS analyzing was done in the mean time and the course reset to a different place, of course properly surveyed. Depending on the tidal conditions, five different 500m courses are now available on the Walvis Bay Speedstrip.

Although everybody was ready for another go, even during the night hours for an attempt in the salinas, this was the last windy day of this period, and on the afternoon of the 23rd of November all the equipment was packed and shipped back to Windhoek for the return flights.

Even if the salinas did not work under the prevailing circumstances this year and therefore the chance to break the 50 knots barrier was not given during this months period, the 2006 Walvis Bay Speedsailing Record Attempt was one of the most successful events in Speedsailing history.

Next year we will be back, and without the almost total lack of suitable wind we will attack the 50 knots again !

(All record claims are subject to WSSRC ratification)

All the world records 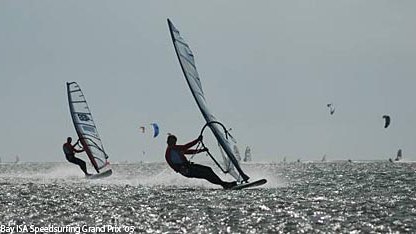