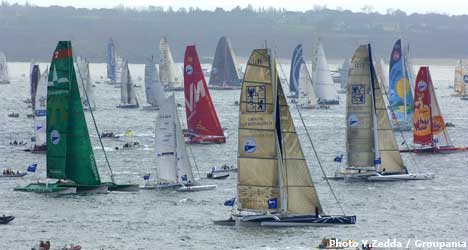 At 13:02 sharp, after one week of final preparations for one of the hardest and most competitive solo-racing competitions, the 74 skippers are finally out at sea, freeing themselves from the earth constraints. At the order of the race committee, the colored multihulls and monohulls sterns’ cut the 2 mile-long starting line and headed towards the Cape Frehel mark, the sole point to pass before tracing their route across the ocean to Pointe à Pitre. 10 000 to 12 000 people were on the water to celebrate the start of this amazingly popular event. Aproximately 2 hours after the start Franck Cammas (Groupama) passed Cape Frehel with a 5 minutes lead on the rest of the fleet, benefiting from ideal weather conditions for his boat.

Seventy-four solo-sailors finally set sail at 13:02 today for the 3,543 miles (direct route) of the legendary Transat Jacque Vabre-La Banque Postale. The skippers would have liked stronger and steadier winds, even if not wishing “hairy” conditions to begin the race as their bolids was limited to 10 knots.

Before and after the start, the difficulty was to manoeuver in weak and unstable winds, dealing with the residual waves generated by the motor boats around. Avoiding hitting a vessel among the fleet of competitors and spectators’ boats was also one of the main concerns of the sailors at this time. “Going over the start without hitting anything could be the most difficult part of this race as it will be crowded this year ! - says Ross Hobson (Ideal Stelrad, Multihull Class 3) a few days before the start - once that’s done, I’ll be happy ! One hour after the start (in between the starting line and Cape Frehel), Franck Cammas, (who chose a light offshore option in comparison to the other multis) was leading in front of Géant (Michel Desjoyaux), Thomas Coville (Sodéb’O) and Pascal Bidégorry (Banque Populaire). In the IMOCA Imoca #IMOCA class, Jean Pierre Dick (Virbac-Paprec), Vincent Riou (PRB), Roland Jourdain (Sill and Veolia), and Jérémie Beyou (Delta Dore) quickly caught up with Jean Le Cam (VM Matériaux).

The strength of the wind increased progressively as the boats reached the open sea, its direction shifting from Northwest to West, enabling the vessels to reach the Cape frehel mark on a direct line.

The amazing Jean Yves Escoffier (Crêpes Whaou ! 50 footer multi) is showing off, he passed the mark in the 10th place ranking, leaving Orange and two other multihulls behind him. In the 40-footer class, Ian Munslow who is considered one of the favorite in this class, reached Cape Frehel in second position behind Dominique Vittet (ATAO).

With no forecasts of big winds or huge seas in the days to come, the skippers will calmly but nonetheless competitively find their pace on the boats and in the race.They have already started to elaborate their tactics in regards to the competitors in their class.

The unusual weather conditions at this time of the year (a high pressure system positionned on Brittany and a low on the Azores) may also increase the pace of the race, giving the skippers of the fastest boats the opportunity to break the crossing record Record #sailingrecord set by Laurent Bourgnon (12 days, 08 hours in 1998) in multihull and Ellen MacArthur (13 days, 13hours, in 2002) in monohull. 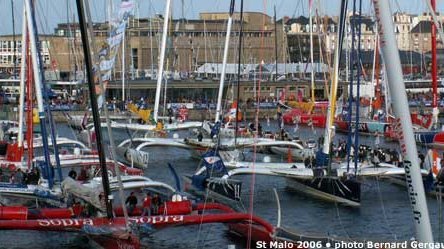 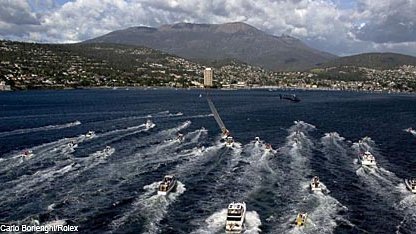 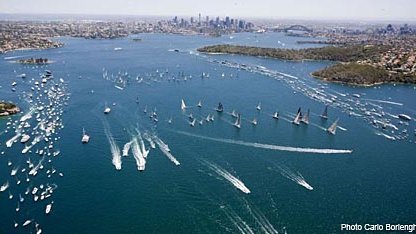 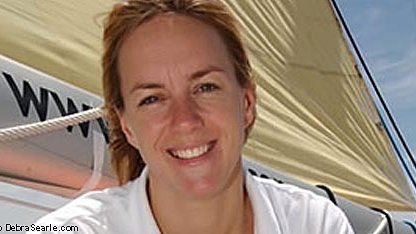