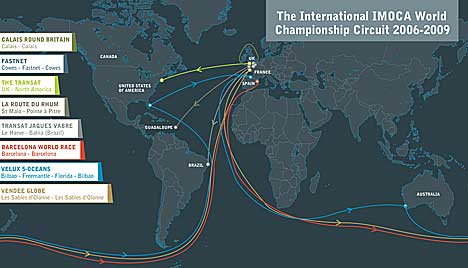 Ellen MacArthur, the fastest solo sailor around the planet, will head-up A two-boat Imoca Imoca #IMOCA Open 60 campaign for 2007-2009 for the Offshore Challenges Sailing Team. “My focus is to drive this new team forward, to support up and coming talent to realise their potential. My plan is to take a step back from solo sailing and, as such, I will not compete in the Vendée Globe in 2008...” she said.

After the conclusion of the Asian Record Record #sailingrecord Circuit onboard the trimaran B&Q, Ellen’s focus will, once again, return to one of the world’s largest and most exciting ocean racing fleets - the IMOCA Imoca #IMOCA Open 60 monohull class [1]. After nearly ten years in the sport of professional short-handed sailing, the foundations are now in place for an exciting future.

Ellen’s objective is to head-up a two-boat IMOCA Imoca #IMOCA 60 team, to include some of the world’s best sailors to be selected over the coming months, aiming for victory in the IMOCA World Championship circuit 2007-9. The circuit covers thousands of ocean racing miles in a mix of solo, two-up and five-up races ; a truly international fleet of over 25 competitive boats, racing around Europe, North America and, of course, around the planet.

With these new responsibilities as syndicate head, Ellen has made a decision to take a step back from solo sailing herself and concentrate her efforts in putting together an IMOCA 60 team that can compete at the very top end of the sport, utilising nearly a decade of experience and extraordinary success. This team will combine the talents of sailors who have the ability to reach the podium with the support of a shore team that has unrivalled expertise.

Ellen has decided not to compete in the 2008/09 Vendée Globe although may sail as co-skipper of the second boat in the crewed events of the IMOCA circuit if that is considered to be in the best interest of the development of this new sailing team.

Ellen MacArthur : “The recent South Georgia expedition and life with the Albatrosses was in many ways a life-changing voyage and adventure for me. My eyes have been opened to many aspects of the world around us that in our everyday lives we have little time to notice, let alone take in. After nearly ten years of full-on professional sailing including, if you add it up, a year’s worth of racing solo, I wanted to use the time down there to think about what I do next.

The conclusion of the amazing title sponsorship with B&Q later this year, gives me a natural opportunity to broaden my horizons and begin the process of working with our fast-growing team at OC Group. This company is co-owned by myself and Mark Turner, who has managed the business since it began in 1995. Whilst I was at sea, Mark held the reins on shore and now it is time for me to put my energy and experience I’ve gained into the ongoing success of the company and the development of the Offshore Challenges Sailing Team.”

The Asian Record Circuit is the final chapter in the story for B&Q as headline sponsors. Having supported Ellen for eight years in one of the most successful sporting partnerships ever, B&Q will release its rights to the title sponsorship at the end of its planned term, and having exceeded all its business expectations. The media return alone after the successful solo record attempt ran into tens of millions of pounds, and the project was widely acclaimed by the sponsorship industry. [See separate Case Study attached] The contract will be completed in October 2006 marking the end of an era for both Ellen and B&Q.

“Our partnership with Ellen and her team was a sound business investment which has delivered significant value to the B&Q brand. This was a sponsorship full of innovations, the likes of dual branding on the boat with one side B&Q and the other side Castorama getting two sponsorships for the price of one. We had high expectations of the sponsorship and even they have been exceeded through Ellen’s achievements in the past few years. The live coverage generated of Ellen and the B&Q brand on her successful return to Falmouth after her round the world victory is the type that money just can’t buy, and we’re immensely proud of that and her. Her achievements have touched every one of our 38,000 employees.

The Asian tour is the last chapter of the sponsorship story for us in being able to extend Ellen’s reach to our Asian businesses. Following that, we’ll be moving to a new era, although still one of Ellen’s subsidiary sponsor’s as well as supporting her charity, the Ellen MacArthur Trust.

Our main focus for sponsorship going forward will be our support of the British Olympic Team, including another sponsorship innovation, our own team of athletes, working in our stores and training for selection for the Olympics in Beijing in 2008. We want to help them achieve ultimate success,” said David Roth, Marketing Director B&Q (2001-February 2006)

With the foundations of a new sailing programme in place, Ellen’s team will be reviewing future sponsorship offers to support this new sailing programme : “We anticipate making a decision over the next 2-3 months to have sufficient time for research, design and build of the new boats,” commented MacArthur.

“The B&Q sponsorship has been an incredible effort on both sides that has redefined the benchmarks within our sport. We look forward to working with a new title sponsor and to give them the same award winning service and return we gave to B&Q and Castorama over the past few years,” said Mark Turner, CEO OC Group. “We have unrivalled expertise in our field to win on and off the water, and that passion to win is as strong as ever, with the great team that will benefit from a focussed input from Ellen.”

About Ellen MacArthur and Offshore Challenges

MacArthur’s previous success in the IMOCA 60 class began with her outstanding second place in the 2000/1 solo non-stop around the world Vendée Globe race at the age of just 24, and in her very first global race. MacArthur was catapulted into the public eye and that then set the stage for the extraordinary years that have followed. Ellen’s accelerated professional sailing career has already included monohull victory in two solo transatlantic races, The Transat and the Route du Rhum, onboard the IMOCA 60 ‘Kingfisher’. In early 2003 Ellen led a Jules Verne round the world record attempt onboard the giant Maxi-cat ‘Kingfisher 2’ with 13 crew, that came to an end after the mast collapsed in the Southern Ocean. Then most recently, the build of the 75-foot record-breaking trimaran B&Q in early 2004 that delivered MacArthur’s most emphatic triumph - a new solo world record as she lapped the planet in a record time of 71 days, 14 hours, 18 minutes and 33 seconds finishing on 7th February 2005.

Number of miles sailed by Ellen during the Kingfisher sponsorship : estimated 245,000 nautical miles - approximately 10 times around the world

Out of the five major solo ocean races during the campaign, Ellen has won three (Route du Rhum 1998/2002 and The Transat in 2001 - formerly the Europe 1 New Man Star] plus a second place in the non-stop round the world Vendée Globe race 2000/01.

Number of television viewers of Ellen’s solo round the world record finish across UK, France, Germany totalling around 90 million

120,000 manual hours of building/refitting boats for the campaign

A sports marketing, management and communications company for professional sailing and adventure athletes and sailing events.A truly international 35-strong team managing multiple projects in five languages. A complete and fully integrated skill set (from sponsorship sales and strategy development, through to sponsorship fulfilment via project management and both traditional and cutting edge communications) designed specifically to help ensure sponsors maximise return on their sponsorship investment in these challenging sports. The projects have won four Hollis Awards for the most effective use of sponsorship 2002-2005 and in 2005 Ellen MacArthur’s recent project with B&Q was awarded the Association for Project Management Enterprise Project of the Year.

[1] An IMOCA 60 is a 60-foot long (18.28 metres) single-hulled (monohull) yacht, governed by a Class association called IMOCA. Ellen raced an IMOCA 60 named ‘Kingfisher’ in the IMOCA circuit between 2000-2002 including the solo Vendée Globe.