45 days from her start from the Channel, she rounds Horn Cape 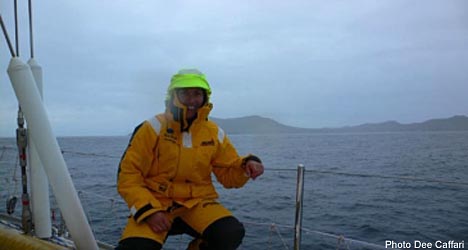 Dee Caffari took time to chat to Chilean Navy and Cruise Ship Captain as she rounded Cape Horn close enough to see the rock. 35 knots on the nose will welcome Dee to the Southern Ocean. Dee acutely aware of the hardships ahead and the change of strategy required in the Southern Ocean.

"I’ve just rounded the horn on my own !" ? On Wednesday morning, Dee was clearly very happy to have rounded Cape Horn to join what she justifiably called, ?an elite group of people, single handed ’Cape Horners’, east to west.?

As she approached the Cape, she reported an appropriate change in the conditions : ?It was almost as if the weather knew and thought it should do something about it, so it increased the rain and blew 30 knots. It is about 110 miles to the Horn and we are trucking along at 9-10 knots.?

This was Dee ?s second westabout passage round Cape Horn in consecutive years, but last time round she passed 52 miles south of the mark and did not catch sight of the famous cape. She joked that kind weather and good visibility were a must this year to avoid the need for a third attempt !

Thankfully for the solo skipper, the weather was kind and she even had company as she passed close enough to the rock to see penguins and sea birds and smell the sea weed. A world away from the stereotypical image of blasting past the Cape in high winds, she had time to savour her first sight of land in 43 days as she was ?going slow with not a lot [of wind] on the nose.?

A passing cruise ship offered to take photographs for her and performed a drive by. She chatted to the ship ?s captain and the Chilean Navy before taking six attempts to explain to Cape Horn Radio that she was alone on board.

The enormously significant psychological and geographical landmark was even more poignant for Dee after the autopilot problems brought the prospect of failure far too close for comfort. Cape Horn had previously served as the potential cut off point had the problems not been solved and while Dee is obviously extremely happy to be heading into the Southern Ocean, Elaine Bunting reports in her latest interview that Dee is still acutely aware of the hardships ahead.

?Having got used to sailing in the Atlantic, ? said Dee, ?the conditions were predominantly reaching or down wind so the boat was relatively flat. So to go from that to being powered up and on the wind with the boat leaning over will take some getting used to. Even going to the toilet is hard work doing anything takes twice the effort.?

?The seas are quite large now, but also quite long but you also get choppy waves as well if you ?ve got a big wind you can actually leave one wave before hitting the next one and you get 45 tonnes crashing down so you are weightless for a moment and then you land as well !?

A depression bringing winds of 30-35 knots welcomed Dee to her long, hard trip across the bottom of the world and there will certainly be many more as she carves a path through the series of low-pressure systems barreling towards her from the direction she is aiming for.