Season closed in Nouméa with the Alcatel Kitesurf Pro 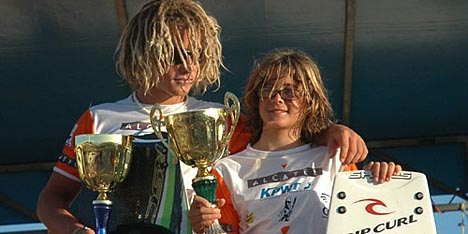 This is the 2005 world cup of kiteboarding season, closed here in Nouméa for the Alcatel Kitesurf Kitesurf #Kitesurf Pro, last stage of the year. It couldn’t better close this season : contrary to the pre-event forecast rather pessimist, the organisation Organisation #organisation benefited from good riding conditions all along the week, giving once again the opportunity for the competitors to enjoy a wide variety competition formats.

Aside the spectacular Best Tricks and Teri Hang Time contests, they’ll of course keep in mind the main freestyle event, that held everyone in suspense until the finals, during which Tom Hébert and Gisela Pulido eventually imposed their leadership.

The organisation Organisation #organisation will also remember the great performance of Robert Teriitahau, who broke the record Record #sailingrecord of the Phare Amédée Speed Crossing. This mythic race that was on the women side led by Gisela Pulido.

The 12 year old the young spaniard just amazingly won every single contest of the Alcatel kitesurf Kitesurf #Kitesurf Pro !.besides, with her 4 victories on the 2005 KPWT season (out of 6 stages), Gisela keeps her world title - she’s at the same time the 2005 junior women world champion and to finish she finished 1st of the 2005 Wave Masters series, which makes her not only the youngest but also most titled female kiteboarder of the history of the sport !

On the men side, the 2005 World Champion is Thomas Cocquelet - contrary to his good places in the last KPWT events (2nd in Brazil, 1st in Australia, 3rd In France) he finishes 7th of the freestyle event in Nouméa but still, he deserves his title thanks to his consistency all along the 2005 six stages.