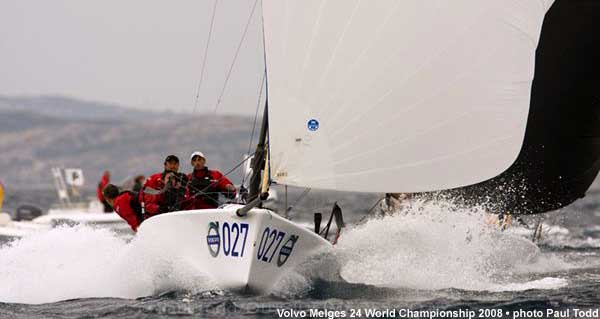 Race ten in the series got underway after an initial general recall in 10-12 knots from 280 degrees and on relatively flat seas. Favini led the fleet at the weather mark ahead of Bressani, with Nicolo Bianchi, sailing ITA716 Saetta, and Gabrio Zandona, sailing ITA633 Joe Fly for Giovanni Maspero, also on his heels. Down the first run, Favini began to pull away, but behind him the battle for second was still a three-way tousle until the second beat when Zandona was suddenly forced to pull out because of a broken shroud turnbuckle. As Favini stretched out his lead, the battle between Bressani and Bianchi raged, with Bianchi eventually claiming victory in the closing moments. Meanwhile back in the pack, Alberto Bolzan, Luca Valerio and Nicola Celon were dealing with problems of their own. Bolzan and Celon fought a hard battle for 11th place, which Celon eventually won, while Valerio trailed in 26th place.

Going into race 11, Bressani now led with 27 points ; Celon held second on 41, Bolzan third on 44, Favini fourth on 53, and Valerio fifth on 63, but more surprises were to come. Favini was one of several teams called over the line and had to go back. Despite his very best efforts he knew the game was over, and he ultimately pulled out of the race. John Pollard, sailing GBR690 A-Team Westaway, led the fleet at the first mark from Bianchi, with Valerio third and Roberto Martinez, helming Carla Ubertalli’s ITA574 Online-Sim Firebolt, following in fourth. Pollard went on to win the race and after a terrific battle Valerio took second from Bianchi with Martinez fourth. Bressani sailed across the line in tenth place and knew that the World Championship was his.

Therefore, race 12 was to decide second place between Favini (53 points), Bolzan (57 points), and Valerio (65 points). Although out of the running for the title, Binachi was determined to end his week in style and sailed to a superb win giving him seventh place in the overall standings. Bressani was keen to put the seal on his victory and took an extremely relaxed second while Celon came through to take third in the race and finish the regatta in 6th overall. Behind them, Favini, Valerio and Bolzan were all well buried and concentrating as much on each other as the fleet. Valerio got the best result at 15th, followed by Bolzan in 22nd and Favini in 30th to give Bolzan second place overall, with Valerio third and Favini fourth.

Bressani, already a J24 World Champion and a veteran of world class campaigns in Mumm 30, Farr 40 and many other classes, teamed up with owner and Mumm 30 World Champion Lorenzo Santini and trimmer and team manager Federico Michetti, already a Melges 24 European Champion in his own right, last year specifically to challenge for this event. He completed his formidable team by adding America’s Cup America's Cup #AmericasCup and Melges 24 veteran and Italian Olympic 49er sailor Francesco Bruni as tactician and Women’s World and UFO22 European Champion Francesca Prina as bow woman.

A delighted Lorenzo Bressani commented, "It’s my sixth world championship win, but in conjunction with the J/24 World Championship in 2003 it is the best win that I can remember ! Obviously we are very happy. There are some really great teams here internationally as well as those that came from the U.S. The fact that Flavio did not have a good race - it was a turning point today. So, we are very happy."

Team Manager Federico Michetti, who started his Melges 24 sailing career with the late, great Giorgio Zuccoli (Melges 24 World Championship in 2000), concurred, "This is amazing. Really, on every leg I was thinking of and praying to Giorgio to please, please help me. Please help us. This has been a really unbelievable season. I am so proud for everything, because we started with this team one and a half years ago and the goal was to win these Worlds. We have been looking forward to this so much. It’s amazing, being the World Champion in Porto Cervo !"

"We are so happy to have won the Silver fleet,” said Paulo Brescia, “however we would have liked to have been sailing in the Gold fleet. This is just great, as we are a group of amateur sailors — I am an architect, the crew is comprised of a lawyer and engineers. The Melges 24 is great because we can sail against such great sailors in the world. We have only sailed together for a short time, but my crew is a combination of some very good 470 sailors. We worked well together so we decided to race together ; this is such a great class."

Speaking after racing Gold Course Principal Race Officer Peter Reggio said, “It’s been spectacular. The people here working on the committee and the mark boats – you don’t see it better than it gets here. They’re the ones who make it work, I’m just an enabler. The mark boat guys are outstanding as is the whole organisation Organisation #organisation . We got through the entire event without a single black flag.”

“It has been a fantastic championship, it required a huge organizational and logistical effort but it was well worth it in the end,” said Edoardo Recchi, YCCS Sports Director. “We managed to hold all 12 of the races scheduled for the worlds, something which is rarely achieved and, in view of the conditions, is really quite remarkable. The level of competition was incredibly high and the racing was always close-fought and exciting, a really excellent championship. 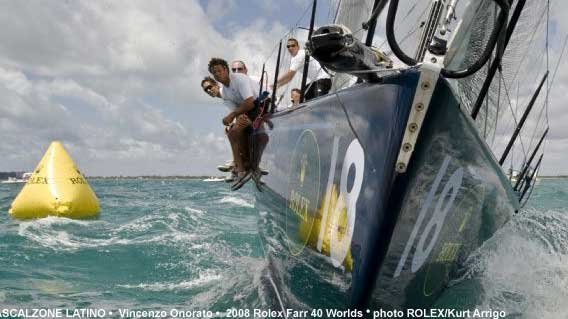