Aera becomes twelfth foreign registered yacht to win the Australian classic In 60 years of the Rolex Sydney Hobart Yacht Race, Aera has become the third British boat to have won the coveted handicap trophy. Owner of the Ker 55, Nick Lykiardopulo, joins the exalted company of Captain John Illingworth who won the inaugural Sydney Hobart Race in 1945 aboard Rani, and former prime minister Ted Heath who sailed to victory in 1968 aboard Morning Cloud. 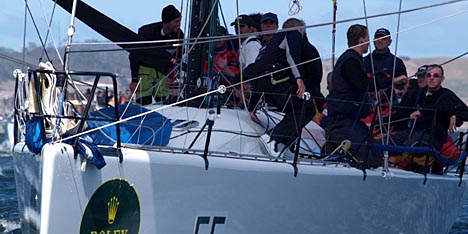 Aera sailed into Hobart on Wednesday afternoon but the crew had a nervous wait to see if any of the smaller boats could snatch The Tattersalls Cup away from them. Skipper Jez Fanstone would not allow himself to believe he’d won until it was mathematically beyond doubt. "That was a three-day race and we spent two and a half years preparing for it, and you only get one shot at it. So to bring all the pieces together and to get it right is very satisfying. We came here and did what we set out to do, to beat the boats in our part of the race and to get here in one piece."

Fanstone paid credit to the team around him. "Out there, people were backing each other up the whole way, helping each other through. We’ve got a lot of experience on board this boat, and we’ve got a lot of experience in this race. Two and half years ago, when we started building the boat, we knew that we would be coming here to do this race in 2004. We designed a lot of the boat around this race. For instance, we knew that when we put up the storm trysail and the smallest jib that the boat would still be going well."

Many of this year’s crew, Fanstone included, raced with Lykiardopulo aboard the old Aera, a Swan 46 which won her division in 1998, another race beset by gale force conditions. But to win the race overall is an achievement that Fanstone will cherish as one of the pinnacles of his professional career. Fellow crew member George Skuodas has competed in the Olympics and for GBR Challenge in the last America’s Cup America's Cup #AmericasCup , but he rates this win as one of the most special. "It’s pretty big. You can go to the Olympics and sail in the America’s Cup America's Cup #AmericasCup and that’s all very good - but winning a major ocean race like this is like winning a Major in Golf or a Grand Slam in tennis. This is a big event and it’s nice to have on your CV that you won this race against 115 other yachts."

When the six-and-a-half foot Skuodas competed in the 1996 Olympic Games, it was as crew in the two-man Star keelboat for Glyn Charles, one of those who lost his life in the Bass Strait during the fateful 1998 Sydney Hobart Race. For Skuodas, winning this race in such testing conditions held a significance that few others could ever understand.

"I haven’t done this race since Glyn died, so it’s very poignant. I think a lot of us on board were thinking about Glyn. It’s a lonely place out there and he was in our thoughts a lot."

"I’m glad to have won it. Of course nothing will replace Glyn being here, but it’s nice to think that he might be looking down on us and that he’s enjoying this win as much as we are."

As Overall Winner on IRC Handicap, Aera will be presented The Tattersalls Trophy and a Rolex timepiece. A presentation will be made to Aera and the Divisional Winners will receive their Winner’s burgees (flags) during a public dockside event on the landing outside Constitution Dock in Hobart at 11:00am (AEDT) on Friday 31 December 2004.

The last placed yacht in the race is Gillewa, 60nm south of Gabo Island (off the southern tip of New South Wales) at 2340AEDT, with still 334nm to go.

The Transat : Eleventh edition of The Transat / OSTAR welcomes 50’ monos and multis