MacArthur around the world

Her trimaran take over 17 hours off Joyon’s time

Ellen MacArthur last night set another new solo time from Ushant [the start of her solo attempt] to Cape Leeuwin on the south-west tip of Australia but today it is back to business as usual : "I’m pretty pleased to have got passed the Cape that’s for sure...you know you’ve ticked another box but until you tick the final box, it counts for nothing. It’s a positive indication that you’re ahead but until that final box is ticked, none of them really count. That’s how I’m thinking about in my own mind - it’s great to have passed, it’s great to be ahead of Francis but at the end of the day we’ve got a lot more Capes to pass and a long way to get home." 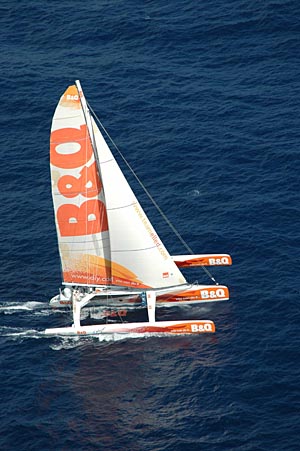 B&Q crossed the longitude of Cape Leeuwin at 22:15:45 GMT last night in a time of 29 days, 14 hours and 5 minutes taking 17 hours and 24 minutes off Joyon’s existing time of 30 days, 7 hours and 29 minutes. This is Ellen’s third new solo time of her record Record #sailingrecord attempt, having set new solo times to the Equator and the Cape of Good Hope. In comparison, Steve Fossett and his full crew on board the giant 125-ft catamaran ’Cheyenne’ took 25 days, 14 hours and 8 minutes from Ushant to Cape Leeuwin and 9 days, 20 hours and 29 minutes to cover the distance between Cape of Good Hope and Cape Leeuwin. This same passage has taken Ellen, on the 75-foot multihull B&Q, 10 days and 4 hours - only 7.5 hours longer. OMEGA : Official timekeeper for Ellen MacArthur.

MacArthur is already 890 miles SE of Cape Leeuwin and 1060 miles to the west of Tasmania, as B&Q builds on her advantage by the hour to nearly 40 hours this afternoon. If you are wondering how MacArthur beat Joyon’s time to Cape Leeuwin by 17 hours but is over a day and a half ahead, this is because the intermediate record Record #sailingrecord is measured to the longitude of Cape Leeuwin and does not take into account how far north or south B&Q is positioned on that north-south line. But the distance to finish for the overall record is measured via a series of waypoints around Antarctica, which are further to the south of both Ellen and Joyon’s track. Therefore, Ellen being much further south, and closer to the finish, means she is further ahead than just the easterly longitude advantage she has on him at present.

This maybe Ellen’s third new solo time but tonight she will be sailing in storm-force conditions for the third time since Christmas Day and it could be much, much worse than before : ""We’re looking at gusts of up to 56 knots on the latest model - it’s the worst we’ve seen so far. There is a low developing on the front behind us which is going to speed down the front which is to our west. I don’t know what to do...whether I should put a storm jib on now or what. Might just go without headsail - if it gets that bad, you can’t risk going to the foredeck, even with no mainsail and just the mast, we won’t stop. Waves already slamming into the side and I’m going to have to make a call on when to ’bail out’ and start going more downwind because I’m going to have to do that at some stage. We’re going to end up really far south but I don’t think we will have a choice. I don’t know how much more she can take before we break something...." Although the last 48 hours have seen more moderate conditions and flatter seas [well, 25-30 knots which is pretty full-on for most day racers/cruisers !], B&Q is heading back into 40-60 knots, this time at an even tighter angle [Force 9/10] which will test MacArthur’s survival skills, once again.

As B&Q approaches the halfway mark having covered 12,487 miles at an average speed of 17.2 knots [13,231 miles are left on an optimum round the world course at an average speed of 12.9 knots in the time remaining], the winds are set to decrease towards the end of the week to see in the New Year but that is no consolation to someone trying to break a record : "After that, we’re going to get to New Zealand and things are going to go lighter and we stand to lose a lot of time there. Francis didn’t have the best passage past New Zealand and it certainly looks like we’re going not going to either. Looking at the weather file, there’s a really big light patch sitting right over the gap between New Zealand and the islands further south - we’re talking 5 knots of breeze. There seems to be another option in the weather files which is to go more south now and then to go gybe and come back up north to go to the east of Campbell Island but west of the icebergs [reported as numerous by the leaders of the Vendée Globe race which have passed already], so squeeze between the two, that’s another option for sure..." On his circumnavigation, Joyon came down to 52 degrees south before gybing north and passing between the Auckland Islands and Campbell Island to the south of New Zealand.