Targé winner of Rolex Trophy - by one point 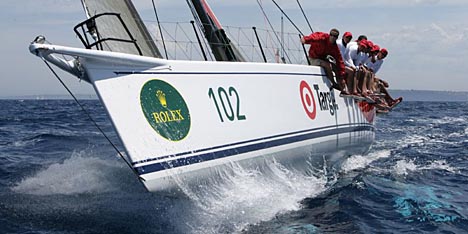 TARGE, winner of the IRC division of the Rolex Trophy
Photo Daniel Forster/Rolex

In perfect sailing weather, a north-easterly seabreeze that freshened from 12 knots to 18 knots and kicked up a short wave chop that almost produced surfing condition, Konica Minolta scored a runaway double of line and IRC handicap honours in offshore races.

The Kiwi supermaxi’s performance enabled it to almost close the five-point margin held by Targé going into today’s races.

The Cruising Yacht Club of Australia issued the final overall points this evening after a protest committee reinstated all yachts in yesterday’s race six in which all but nine boats in the IRC division and 10 in the PHS division were listed as DNF (did not finish) because they finished outside the time limit.

The protest committee’s findings did not alter the placings of the leading boats in race six of the IRC Division nor the final overall results, but they did change the PHS race six results and the overall pointscore.

In the Rolex Challenge teams event, New Zealand (Konica Minolta and Yendys) leads the National/State competition with 727 points from New South Wales (Targé and Brindabella) on 652 points and the Australian team (Ragamuffin and Ichi Ban) on 644 points.

Clubs Victoria (Another Challenge and Fuzzy Logic) lead the Clubs teams section of the Rolex Challenge with 570 points with the Cruising Yacht Club of Australia team (Prime Time and Nips-N-Tux) on 423 points.

In today’s final two races, IRC handicap results in race seven gave Konica Minolta the double of a line honours and handicap win over Targé, the second time she’s collected both, with the Ker 55 Aera skippered by Jez Fanstone, creeping into the top three for the first time and showing ominous signs for the Rolex Sydney Hobart Race.

Race eight, the final race of the Rolex Trophy began in a 17-19 knot nor nor’east breeze with Konica Minolta hitting the line at top speed and quickly breaking away from the pack.

Konica Minolta continued to power away over the longer course to finish more than 17 minutes ahead of Aera, followed by George Snow’s famous maxi Brindabella. Fortunately, the hot westerly bringing temperatures in their high 30s to Sydney did not reach the course until after the final race finished, giving the fleet continued ideal sailing conditions in a 15-18 knot nor’easter.

The final race of the Rolex Challenge is the Rolex Sydney Hobart Yacht Race which counts double points.