Dennis Conner has signed with Nautica 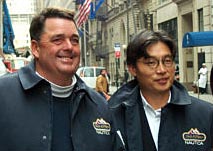 "I have always been inspired by the sea, and my love for the functionality of naval attire has influenced my designs since I started Nautica in 1983," said Chu. "I always try to design classics that are timeless yet with a modern sensibility, and what is a more timeless and classic combination than man and the sea. The Team Dennis Conner gear and the new Stars & Stripes sportswear collection were designed with these classics in mind, using performance and technical fabrics like Nautex, heavy nylon oxfords, triple layer ripstop nylon, quick dry tech jerseys and micro fleece."

The new sportswear collection, Stars & Stripes, will be sold in major department and specialty stores around the world and through the Team Dennis Conner website, www.stars-stripes.com, beginning this summer.

"Winning the America’s Cup America's Cup #AmericasCup takes advanced technology and state-of-the-art design in all aspects of a team’s campaign," said four-time America’s Cup America's Cup #AmericasCup champion Dennis Conner, "and this challenge is about working with the best that America has to offer. With the technical expertise of David Chu and Nautica to keep the sailing team dry and comfortable, we can concentrate on our goal : to bring the America’s Cup back to the USA."

Conner first skippered to defend the America‚s Cup in 1980. After losing it in ’83, he regained it in ’87 and successfully defended again in ’88, becoming the most recognized name in connection with the world’s oldest sporting trophy. New Zealand won the America’s Cup in ’95 and has yet to relinquish it.

From October, 2002, through January, 2003, during the Louis Vuitton Challenger Series in Auckland, New Zealand, Team Dennis Conner will race against nine other international teams for the right to challenge Team New Zealand for the America’s Cup. The America’s Cup Match begins on February 15, 2003.

America’s Cup : GBR Challenge opens its base in the Viaduc harbour