Robert Scheidt, Sofia Bekatorou and Emilia Tsoulfa On Top Of The World

Tonight in Copenhagen, Denmark, the International Sailing Federation and Rolex announced Robert SCHEIDT (BRA), Sofia BEKATOROU and Emilia TSOULFA (GRE) as the winners of the ISAF Rolex World Sailor of the Year Awards 2004. The three sailors were honoured in recognition of their outstanding sailing achievements between 1 September 2003 and 31 August 2004.

Robert SCHEIDT was awarded the male ISAF Rolex World Sailor of the Year Award in recognition of his outstanding achievements in the single-handed Laser Class. In May 2004, Robert made Laser Class history when he won the World Championship title for the seventh time in ten years.

Robert’s collection of sailing records was further increased in August 2004 at the Olympic Sailing Competition in Athens. After posting only two results of the eleven race series outside the top eight, Robert SCHEIDT secured his third Olympic medal in the Laser Class and became the first sailor to win two gold medals in the Class. Robert’s other results during the nomination period are equally impressive. His worst result since 1 September 2003 was a second, and that was at the 2003 ISAF World Championship. At all the other ISAF Graded events, he has finished on top of the podium.

His Royal Highness Crown Prince Fredrik of Denmark presented his Award, after which Robert commented : "I think being World Sailor of the Year 2004 is a great achievement and I am really proud of the year I’ve had. I would like to thank my family, sponsors and my coach who have helped me a lot on my road to the top of the sailing world. Best winds."

2004 is the second time Robert SCHEIDT has won the male ISAF Rolex World Sailor of the Year Awards, having previously triumphed in 2002. His future sailing aspirations include another Olympic campaign in 2008 and an America’s Cup America's Cup #AmericasCup campaign in 2007 - there is plenty more to look forward to from this exceptional sailor.

Sofia BEKATOROU and Emilia TSOULFA were awarded the female ISAF Rolex World Sailor of the Year Awards 2004 in recognition of phenomenal successes in the 470 class.

Sofia and Emilia stole the hearts of their nation in Athens in August when they won the gold medal in the 470 double-handed dinghy in emphatic style. Claiming the Gold medal with a race to spare, the pair didn’t give anyone else a chance, and after Sofia’s injury scare earlier in the year, victory was even sweeter.

In June 2004, Sofia and Emilia were forced to retire from the 470 World Championship in Croatia, but following surgery on her back Sofia was back in the driving seat and the pair’s mission for the gold medal was renewed. When the Games began they were in top form and dominated the event, winning five of the ten races, finishing second in three more. Their series tally was 24 points ahead of the silver medallists, the greatest points delta of all Olympic events. Their tremendous achievement was also acknowledged by ATHOC when they were chosen to extinguish the Olympic Torch at the closing ceremony.

Prior to the Olympic Games within the nomination period, Sofia and Emilia won the 2003 ISAF World Championship, their fourth world title, and several other ISAF Graded events.

Sofia and Emilia also claimed the ISAF Rolex World Sailor of the Year Award in 2002 and the sailing world can expect much more from this talented duo.

After receiving their Award from His Majesty King Constantine, Sofia commented on behalf of the duo, "Being among all of you tonight is a great honour and recognition from the sailing world for our career. Throughout our campaign, we have gained precious experience, and learnt how to fight and overcome difficulties. The greatest gain though has been the process of working in a team. It is similar with tonight’s ceremony. There are few people on the stage, but our result comes from a combined effort the whole team that have supported us and ISAF. We are thrilled to be here sharing this special occasion. ISAF and Rolex, thank you for the honour and the privilege."

Sofia and Emilia are looking forward to more Olympic sailing and have, like Robert SCHEIDT, indicated an interest in competing in the America’s Cup America's Cup #AmericasCup . The Awards Presentation was hosted by renowned sailor and three-time Olympic medallist Jesper BANK (DEN), and attended by more than 500 hundred guests from 50 nations, including international sailors and prominent personalities from the sailing world.

The winners were each presented with a Rolex timepiece and the marble and silver World Sailor Trophy - a solid marble sphere depicting the world and crowned by five silver spinnakers representing the continents.

The other nominees for the ISAF Rolex World Sailor of the Year Awards 2004 were : 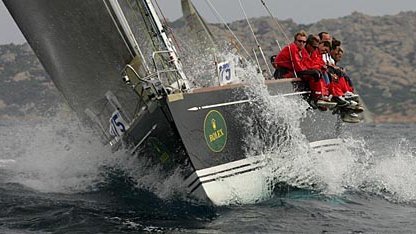