Fred le Peutrec faster sailor in the bay of Douarnenez

Trimaran Gitana XI wins competition with kites and windsurfs with a run of 32.15 knots

Saturday saw the completion of the third edition of the Défi Petit Navire in Douarnenez Douarnenez #Douarnenez . After three days of eyewatering battles against the clock and the competition, it is Fred Le Peutrec aboard 60’ trimaran Gitana XI (ex Belgacom) that takes outright victory with the fastest time in the event’s history. 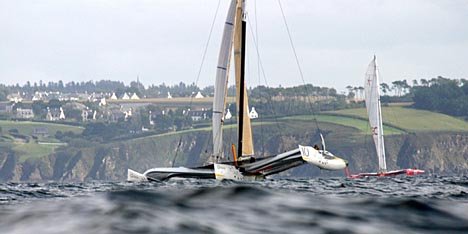 With an average of 10 knots of wind today, the winning skipper from La Trinité sur Mer in the Morbihan, southern Brittany, was not able to improve on yesterday’s time of 16’51” along a 9.1 mile course but interestingly today’s conditions did enable all the other categories to better their previous reference times. Gérald Pelleau in the windsurfing category recorded 21’36” while Manu Bertin scored 24’57” in the kitesurfing category. Round the world record Record #sailingrecord holder Francis Joyon on IDEC got a time of 21’16 in the speed machine section which means that each category got the event record Record #sailingrecord .

Inevitably this was all of great satisfaction to the race organiser Gwen Chapalain. “We’re very satisfied in terms of both the competition and the show we’ve put on for the public. In addition the wind has been with us which obviously helps when you’re putting on a speed competition. Beyond the simple sports aspect, it’s the conviviality and the exchanges between the racers that are fabulous. In the long term we aim to improve the event by offering more regular shuttles to Morgat for the windsurfers and kitesurfers for example. The idea behind this is to be more reactive to the weather conditions.”

This will prove tempting for winner of the Windsurfing category, Gérald Pelleau, though the promise of wind would doubtless really seal the deal. “It’s great to take on the series that we rarely have the opportunity to see in the harbour. It’s different from the usual competitions and it’s rare to be able to race such long speed runs, even though it’s sometimes unbearable to race flat out for 9 miles. Also, in relation to the boats and the multihulls in particular, we obviously can’t trim the sails aboard so we’re forced to choose a sail surface before leaving port which limits our versatility. In any case there’s no way we can compete if we’ve got less than 25 knots.”

Winner of the Kitesurf Kitesurf #Kitesurf category, Manu BERTIN (Team Rubson/Coolwater) “really appreciated this event and its mixture of craft. It was a great pleasure to see Stève Ravussin, (Swiss skipper of Banque Covefi) that I first met during a video session in Greenland. As regards the competition the conditions weren’t ideal for the kites and it was the same scenario for the windsurfers. We need more wind and more built-up seas to compete against the others but I am still convinced that we will never be able to race on an equal footing unless we learn how to profit from the technological advances of these fabulous multihulls.”

For the winner of the 60 foot multihulls, Fred Le Peutrec, along with the rest of his category, this event has enabled them to really grade their boats in this quest for pure speed and so compare the sensations felt by the crew with the theoretical data from the research carried out throughout the year. “We had hoped that the wind would be strong enough and I must admit that we were really spoilt over the first couple of days. It’s magical to sail in this mythical bay passing so close to the sea wall and the spectators. I have to admit to turning my head a number of times at the passage of the windsurfers and kites. I am always impressed by them because 9 miles is really physical. In any case this performance has reassured us that our work over the past months is paying off and it’s important to arrive at the Grand Prix de Fécamp confident.”

Having just repaired a decidedly wrecked transom after hitting an unidentified floating object during the recent Transat Québec Saint Malo, victory in the 2004 Défi Petit Navire must be all the more sweet for the Gitana XI team. Similarly, with the first of three ORMA Grands Prix starting in Fécamp from 26 to 28 August, the team have picked a good time to peak in what is an all too rare opportunity to race without the constraints and pressure of official competitions. The event is also a great occasion to mix with sailors from different universes and share their passion for speed, something that kitesurfer Bruno Sroka knows all about having being invited by the skipper of Gitana X, Marc Guillemot to sail on the delivery to Fécamp.

All this is what makes the Défi Petit Navire such a favourite amongst the competitors and clearly, with 125 runs raced over the past three days, the public lining the beautiful Finistere shores have really been spoilt too.

Written by Kate Jennings for/ but not employed by or attached to, the Défi Petit Navire, website www.grandprixpetitnavire.com as part of her continued “Internationalisation of Sailing Events Campaign”.

• The results in the General Ranking after 125 runs

Best time of all categories over a 9 mile run

Québec St Malo : Karine Fauconnier is continuing to stretch away across the Irish Sea

Transat Québec-Saint Malo : Fauconnier and Desjoyeaux lead race to the Fastnet by the North