Photo: C.Borlenghi / Sea&See.it
Assa Abloy timed her finish to perfection to win line honours in the 57th CYCA Sydney to Hobart Yacht Race when she slipped across the finish line in full view of a huge crowd on a busy Saturday morning at just before 10 am local time.

Skipper Neal McDonald was jubilant, smiling for the waiting media Media #media who almost sank the crowded pontoon, anxious to get his first thoughts. "A walk in the park" was how McDonald described the last few days. Standing in the sunshine in the cockpit of Assa Abloy, McDonald said that winning line honours felt "terrific, fantastic", adding "It‚s one of THE races I’ve always enjoyed doing and to get over the line first is a real bonus."

In the midst of all the line honours activity, Grant Dalton’s Amer Sports One arrived in the harbour followed almost immediately by Tyco, Djuice, News Corp and illbruck. The crowds were rushing up and down Elizabeth Street Pier looking over the harbour wall and down onto the boats as the crews gathered for interviews with the waiting media Media #media .

Hans Sommer, Commodore of The Cruising Cruising #Cruising Yacht Club of Australia (CYCA) presented their local boat, News Corp, with the Jack Rokklyn trophy for being the first boat out of The Sydney Heads. This team also collected AUS$10,000 in prize money for being the first boat round the seaward mark, a fund of which they have decided to donate to the NSW Bush Fire Relief Fund.

Amer Sports One was the only yacht forced to tack to avoid the Iron Pot; an island formerly used as a rendering station for whale blubber, hence its name. 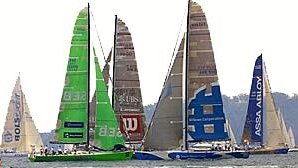 VO60 s gather at the start of the Sydney- Hobart race which is part of the third leg in the Volvo Ocean Race from Sydney to Auckland. Photo: Oskar Kihlborg Team SEB Electronic Image.

Photo: Illbruck on the way to the finish with the Sydney Opera House in the background. Photo: Daniel Forster illbruck