Start of the leg 3 from Sydney 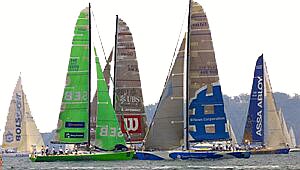 It was a more sombre occasion than the usual razzamatazz of restart mornings, a request made by the teams, and heightened when the boats formed a semi-circle in front of the Pyrmont Bridge. The crews stood quietly together and then threw wreathes into the water, in memory of Sir Peter Blake, a man who meant so much to so many of the competitors who are racing today.

The skippers then turned their boats towards the Sydney Harbour Bridge and the Opera House, and motored towards the start line situated just east of Bradley’s Head and north of Shark Island. A southwesterly 6 - 8 knot breeze was blowing straight down the racetrack, the sky hazy with smoke from the still-burning bush fires, the air pungent and heavy with ash.

Code Zeros were hoisted as the Volvo fleet drifted towards their start line, where they made a clean start, downwind on port gybe in the dying, shifting, breeze. News Corp, illbruck and Tyco led the fleet away towards the first turning mark set north of South Head, approximately 1.5 nautical miles from the starting line, while Amer Sports One and Assa Abloy were stalled behind the line.

Ten minutes after the fleet cleared the starting area, the wind filled in from the southeast, the right hand side of the course, setting News Corp free and allowing her to leave the rest of the fleet almost standing, pulling out a 500 metre lead. The wind was now blowing down the harbour, and News Corp changed to a headsail followed quickly by illbruck, SEB and djuice. The rest of the fleet followed as they began to tack down towards The Sydney Heads, unfurling their code zero‚s for the longer, starboard tacks, and using headsails for the short tack on port.

News Corp, skippered by Britain’s Jez Fanstone, and sailing under the burgee of the Cruising Yacht Club of Australia, led the fleet around the turning mark and out of The Heads on this 2,050 leg to Auckland, New Zealand, via a three and a half hour pitstop in Hobart, Tasmania, 630 up the race track.

At the turning mark, Norway’s djuice were second, just one minute 15 seconds behind News Corp, followed by illbruck at two minutes 8 seconds, SEB at two minutes 57 seconds, Tyco at four minutes 37 seconds. Amer Sports Too and team mates Amer Sports One arrived at the mark at the same time, five minutes 55 seconds behind the leader, but the crew of Amer Sports Too judged the mark too wide and let Grant Dalton slip inside and sail away. Assa Abloy trailed six minutes 49 seconds behind the leaders, with the CYCA Sydney Hobart maxis were already overtaking the back half of the Volvo fleet as they left The Sydney Heads behind them and sailed out into open water.