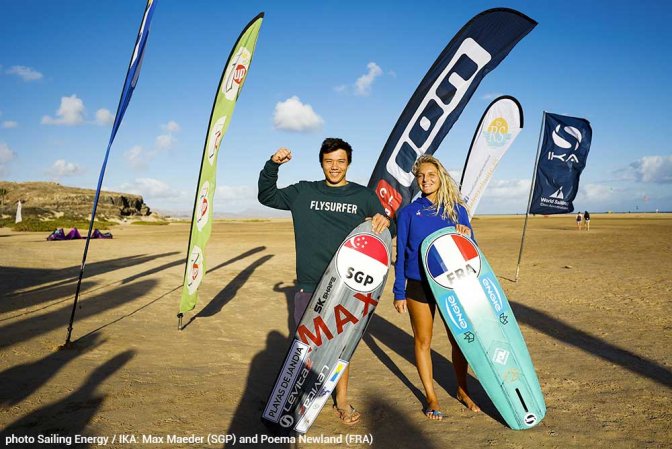 Big offshore gusts and sunny skies delivered a barnstorming conclusion to the 2021 KiteFoil World Series Fuerteventura. Max Maeder of Singapore came out on top in a thrilling duel with Axel Mazella from France. Poema Newland of France dominated the women’s division, winning the trophy ahead of Great Britain’s Ellie Aldridge.

After a rain stormy day of confused winds on Friday, the classic Fuerteventura northerly breeze kicked in for the climax of the event, the offshore gusts whipping up the sand on Risco del Paso beach in the south of the island. The wind was expected to blow between 18 and 22 knots but in reality it was stronger than that. Riders mostly opted for the 11 square meter kite, the second smallest choice.

Once they’d completed the first race, many were wishing they’d gone for the rarely-used 9 meter alternative. Dor Zarka, a 100kg-plus Israeli rider, said : “Trying to fly the 11 meter was the hardest thing I’ve done in my life. It was hard changing down to the 9 meter but it was better.”

As the fleet launched off the line for the first of six races, it was clear that Maeder and Mazella would be closely matched. As Mazella explained at the half-time lunch break : “Max is really fast upwind, it’s hard for me to hold him. But downwind I have the edge. We’re very close on speed around the course.”

At the top of the course on the second lap, Maeder held a marginal lead of just a few meters ahead of Mazella. The Singaporean fired around the mark and off downwind. Mazella sailed on to a 35-knot power reach towards the finish near the beach. Maeder had been on autopilot mode, failing to notice that it was an unusual 1.5 lap format with the finish at the windward end of the course. “Not again ! Not again !” the 15-year-old berated himself. It was a repeat of a mistake he’d made in race one a couple of days earlier although on that occasion Maeder had still managed to scrap across the line ahead. This time he could only recover to 14th, while Mazella cruised home for the win.

Maeder got his head together after that, winning four of the next five races and finishing second in the other. Despite his young years, nine less than his hero Mazella, Maeder was unstoppable in the big conditions.

Mazella remained consistent for the rest of the day, and with all scores counted would have been the outright winner. In the overall season Mazella is pretty much uncatchable. Although Maeder’s results in Fuerteventura were more variable, the three discards enabled him to drop a 20, 14, and 5 from his scores, giving him the overall win by four points from the Frenchman.

In third place was Great Britain’s Connor Bainbridge who bounced back from a bad tangle in race 8 with another strong-wind performer, Denis Taradin from the Russian Yachting Federation. So close are these two on overall points after four events in the 2021 KiteFoil World Series Fuerteventura, whoever beats who at next week’s finale in Gran Canaria is set to finish runner-up for the season behind Mazella.

Poema Newland was the stand-out female performer at this event, finishing 32 points ahead of Ellie Aldridge. Valeria Garashchenko turned on the speed today to race past Spain’s Gisela Puledo and take the final podium spot for the Russian Federation.

In the Masters division, Denmark’s James Johnsen came home first ahead of Kari Eisenhut of Switzerland and Frederik Jorgensen of Denmark.

As well as winning overall, Maeder was top youth ahead of Italy’s Riccardo Pianosi and Ulysse Dereeper of France. All three podium finishers will face off against each other at the 2021 Youth Sailing World Championships in Oman just a couple of weeks from now.

Now it’s only a couple of days rest before the circuit moves across to another island in the sunny Canaries for the series finale, 2021 KiteFoil World Series Gran Canaria. This time next week the outright champions of the World Series are set to be crowned. 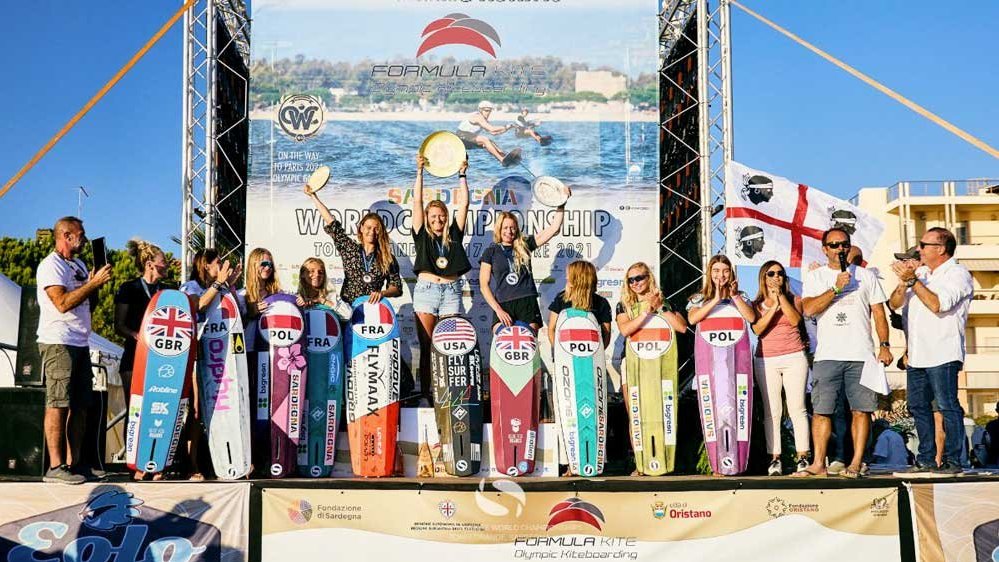 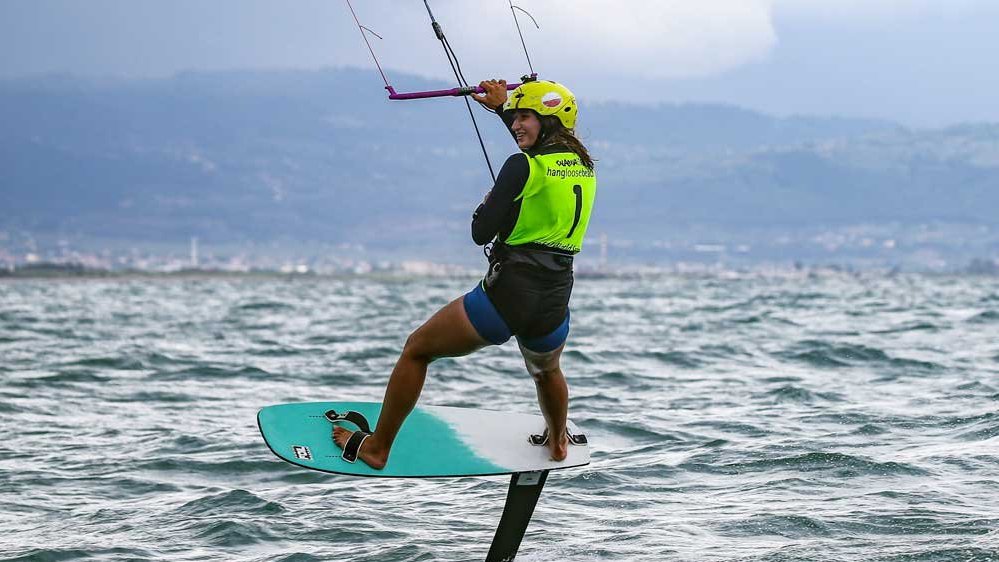 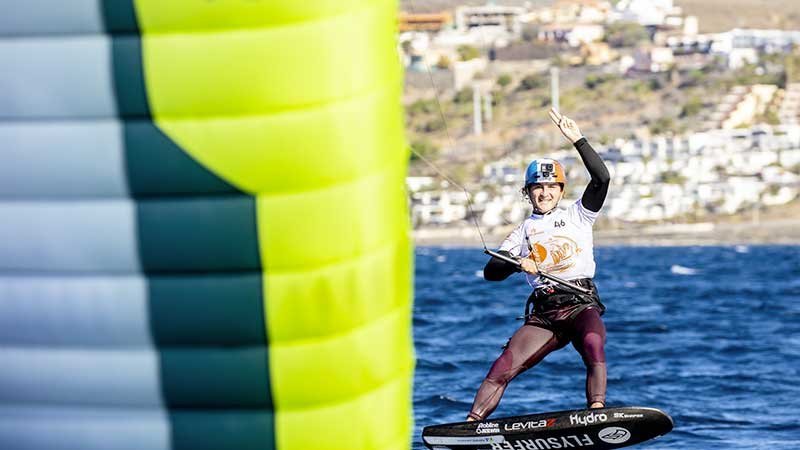 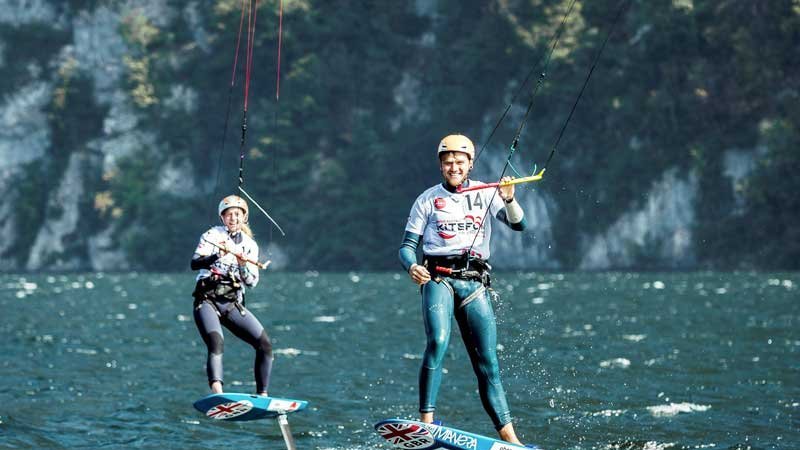