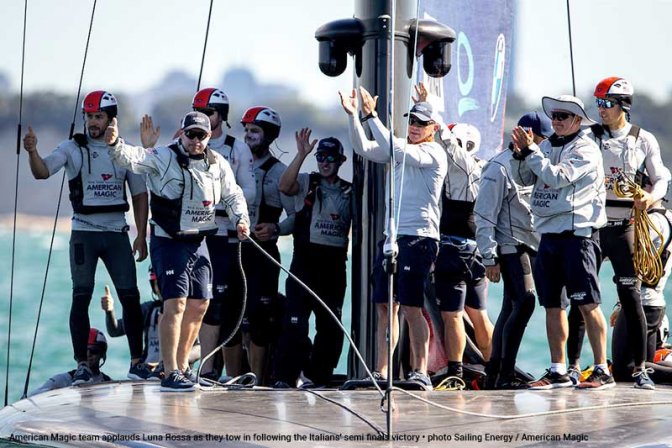 New York Yacht Club American Magic, the U.S. Challenger for the America’s Cup America's Cup #AmericasCup , was eliminated from the Prada Cup Semifinal following a loss in the fourth race of the series against the Challenger of Record Record #sailingrecord , Luna Rossa Prada Pirelli of Italy.

American Magic’s participation in the events associated with the 36th America’s Cup America's Cup #AmericasCup marked the 30th time in the 170-year history of the event that a New York Yacht Club-backed team had competed as either the Defender or as a Challenger. The campaign for Auckland 2021 was also the club’s first attempt in 18 years to reclaim the oldest trophy in international sport.

"We all recognized very early on the legacy that we represent with the New York Yacht Club," said Terry Hutchinson, the Skipper and Executive Director of American Magic. "They’ve been in the game longer than most, and so in that light, I think when I look back it’s without question my greatest honor to be involved. And at the same time, you feel the sting of defeat."

The team showed tremendous determination in returning to the Prada Cup racecourse 11 days after sustaining severe damage and nearly sinking during the Round Robins stage. Nevertheless, due to a loss of critical racing and training time while repairs were carried out, American Magic was unable to match the performance development achieved by the Italian syndicate in between the Round Robins and Semifinal stages of the event.

"I just can’t say enough; to have been through that whole thing and to be able to get back out there and go sailing again," said Dean Barker, a 7-time America’s Cup America's Cup #AmericasCup campaigner and one of the winning helmsmen at the Auckland 2000 edition of the event. "It’s obviously disappointing for us to finish the way it has, but I’m incredibly proud of the team and what they achieved to get the boat back on the water after such difficult circumstances."

Luna Rossa demonstrated noticeably increased speed Speed #speedsailing and efficiency against American Magic, and turned in a nearly flawless performance over the best-of-seven series. With four wins in four tries, Luna Rossa Prada Pirelli, who are on their sixth campaign for the Cup since 2000, decisively earned a berth in the Prada Cup Final. The winner of the Prada Cup will face Emirates Team New Zealand in the 36th America’s Cup Match Presented by Prada.

The story of the team began in late 2017 when world champion sailors Hap Fauth and Doug DeVos joined with motorsports icon Roger Penske to become Team Principals for the U.S. Challenger. From its founding onwards, American Magic pursued the twin goals of winning the America’s Cup and re-engaging the American sailing audience with the premier event in the sport. While the first mission remains incomplete for now, much was also done to pursue the second.

American Magic was the first Cup team to use the Newport, Rhode Island, area as its primary training location in roughly a quarter of a century. The team also restarted the 128-year old tradition of building America’s Cup yachts in the Ocean State, and was the first Cup team to train (during the colder months) on the Gulf of Mexico since the 1970s. Pensacola, Florida, was used as a winter base until the team relocated to Auckland in mid 2020. American Magic was a high-profile presence in each area it operated from, and conducted hundreds of presentations, press interviews, tour stops, and digital outreach projects in an effort to boost U.S. awareness and interest in the America’s Cup.

"We wouldn’t be sitting here without each one of [the Team Principals]," added Hutchinson. "When we started this program in 2017, I was getting a little bit of cold feet and I communicated that to Doug and Hap. And Doug wrote me a nice note back, saying ’I think we should go for it.’ And here we sit. And from there, partnering with Roger Penske. All of these people, and the [New York Yacht] Club, represent what’s great about our country, [with] the passion that they bring to the sport and the passion that they bring to sailing. Roger was always quick to say he didn’t know a lot about sailing, but he knows a lot about winning. And his influence on our team was always present."

American Magic’s performance program was characterized by a relentless work ethic and a commitment to on-the-water testing unmatched by the other teams. The U.S. Challenger was the first to launch a full-size test boat in 2018, and recorded 92 days of testing on "the Mule." The first AC75 AC75 #AC75 to sail and foil Foil #foil , DEFIANT, came next, and completed 66 days of sailing despite delays receiving event-supplied equipment, seasonal logistical challenges, and the onset of the COVID-19 pandemic.

The team’s second AC75 AC75 #AC75 , PATRIOT, was flown from Bristol to Auckland upon completion. PATRIOT was the first 2nd-generation AC75 to be launched, and her final day of racing at the Prada Cup was her 49th day on the water.

Over three and a half years of design, production and testing work, American Magic became a Challenger worthy of the formidable competitive field in Auckland. The other three teams all returned to the 36th America’s Cup after participating in at least some of the 35th Cup cycle (Bermuda 2017) and in the case of Emirates Team New Zealand and Luna Rossa, many previous campaigns.

After losing two America’s Cup World Series (ACWS) exhibition regattas to COVID 19-related cancellation, American Magic charged out of the gate at ACWS Auckland, the world’s first AC75 regatta. PATRIOT turned heads by beating Emirates Team New Zealand’s TE REHUTAI once during a practice race, and again on the first official day of racing. American Magic finished the event in second overall with a 4-2 record Record #sailingrecord , and seemed primed to continue on a positive trajectory into the Prada Cup, the Challenger Section Series.

Sadly for the U.S. team, this was not to be. An opening-day loss to INEOS Team UK in the Round Robins was followed by a frustrating double-loss to both other Challengers in marginal racing conditions on Day 2. American Magic showed impressive poise on Day 3 of the event, and was leading Luna Rossa in strong winds by several hundred meters when, in the span of a few seconds, American Magic’s sleek blue AC75 bore away onto the final leg, lost control in a gust, launched into the air, crashed down hard, lost a sizable section of her forward port-side hull, and started to rapidly sink.

The story of American Magic’s fight to save PATRIOT, assisted by three competitors, Auckland’s first responders, AC36 race managers and many others, resonated with millions around the world who watched, listened and read about the heartbreaking accident and its aftermath.

"I think the competitors showed an incredible amount of sportsmanship and really demonstrated what sailing is about at the highest level when they all reacted to the PATRIOT’s near-sinking," said Hutchinson. "It’s just heartfelt."

The team was relieved that no one on board PATRIOT was seriously injured, but faced an uphill climb to stay in the competition. The level of damage incurred by PATRIOT was substantial, and world normally take weeks or months to actualize. Nearly every system onboard, including the critical foil Foil #foil cant system and much of the electronics, had to be replaced. In addition, due to composite core damage, a section of the hull much larger than the hole itself had to be cut away, rebuilt, and plugged.

As audiences in the United States and overseas watched American Magic doggedly restore PATRIOT to fighting shape, 24 hours 24 hours 24 hours best distance covered records a day, for a week and a half, thousands of messages and gestures of support flowed to the team. American Magic re-launched PATRIOT a remarkable nine days after the incident, but were unable to beat Luna Rossa in the Prada Cup Semifinals.

"It’s obviously disappointing," said Hutchinson. "There’s not a person inside of our team that likes losing. You have 135 ’Type-A’ personalities all pushing for the same thing, in the same boat, for the same result. I have nothing but pride for what we’ve done over the last three and a half years. All we can do is take it on the chin, understand our strengths and weaknesses, and move the whole game forward."

New York Yacht Club American Magic has now completed a multi-year campaign that was at every stage relentless, unquestionably competitive, occasionally heartbreaking and, ultimately, inspiring to many. The future of American Magic as a team has yet to be determined, and the winners of both the Prada Cup and the 36th America’s Cup Match have yet to be revealed. Nevertheless, the team has taken its place in the long and proud tradition of America’s Cup teams representing the New York Yacht Club and the United States of America.

"Somebody has to win, and somebody has to lose," said Hutchinson, a 16-time world champion who has campaigned for the America’s Cup five times. "We always felt that we were prepared, and that we’ve done things in the correct manner to be on the right side of things here [in Auckland]." 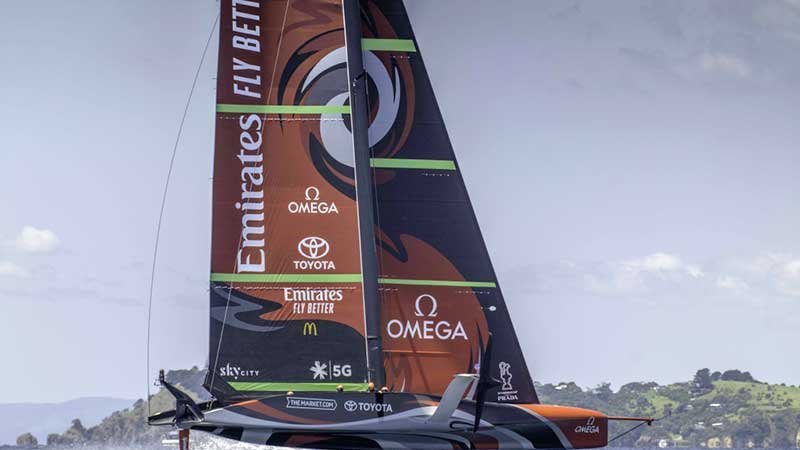 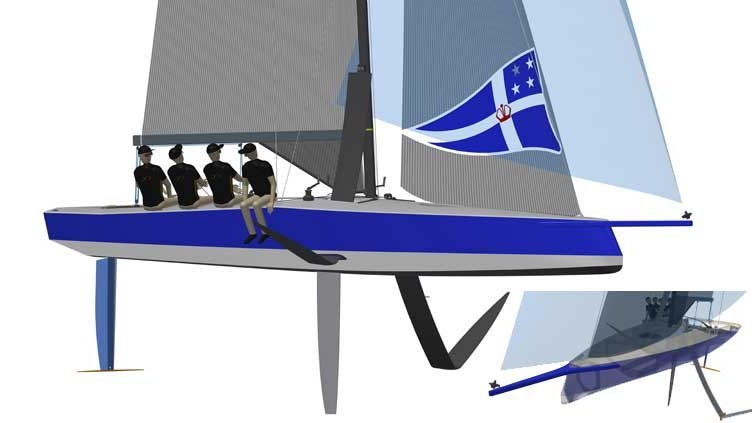 #AC36 #PradaCup : Laurent Esquier, CEO of COR 36: "We look forward to Auckland where we will organise the Challenger Selection Series in January and February 2021" 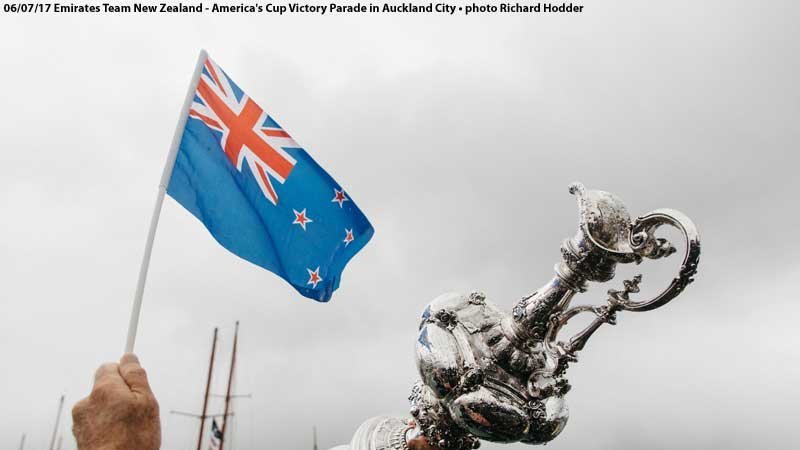 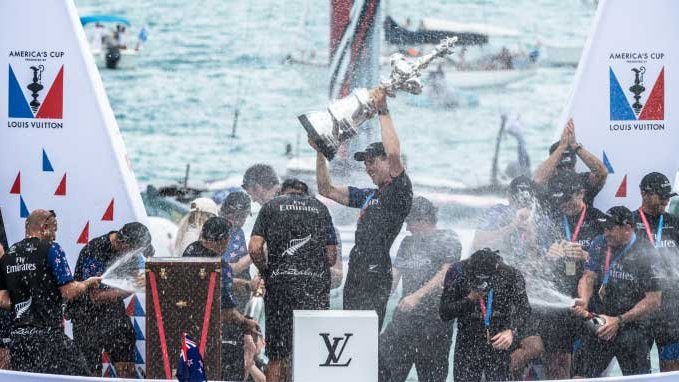