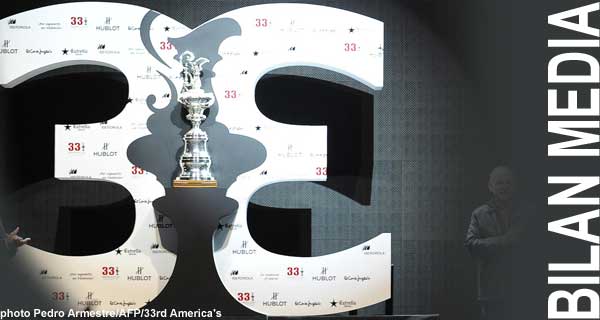 The second successive victory for BMW ORACLE Racing against Alinghi on Sunday 14th February 2010 marked the end of the 33rd America’s Cup America's Cup #AmericasCup in Valencia. As an international sporting event it was without precedent in terms of the organization.

One month before Consorcio Valencia 2007 jointly with an international team of specialists staged a global event which again placed Valencia on the world stage.

On 7th February the Port America’ S Cup located in the Marina Real Juan Carlos I of Valencia inaugurated the 33e edition of the oldest international sporting trophy in the world in front of more than 60.000 people.

Over 10 days, more than 150 people of 10 nationalities were engaged in the smooth operation on the ground of an event which welcome over 200, 000 visitors and which concluded with the ceremony of handing-over of the spectacular trophy crowned by an exceptional fireworks display.

15 hours of live broadcasting to 216 territories

656,000 unique visitors watched the live racing direct through the official web site (this audience does not include the streaming broadcasting by 350 other Internet sites worldwide)

346,000 was the record Record #sailingrecord number of unique visitors, occurring on the 12 of February 16,000 Facebook fans and 13,000 followers on Twitter in the three official languages of all the communication Communication #Communication of the Web (Spanish, English and French)

More than 300 articles published more in three languages on www.americascup.com

More than 2,000 children of Valencian schools in organized visits

More than 8,000 articles were published

15 official Vehicles that have realised 13,244 kilometers in more than 700 services

1,000 1 minute adverts of the 33rd America’s Cup America's Cup #AmericasCup in the trains of the Mediterranean corridor area

Continuous advertising of 35 seconds in 345 buses of Valencia

Presence in airports of Madrid and Barcelona

2 boats : the catamaran Alinghi 5 and the trimaran the USA

2-0, the score in favor of BMW ORACLE Racing

15 minutes and 25 seconds, the delta of first race, the 12 of February

5 minutes and 29 seconds, the delta of second race, the 14 of February