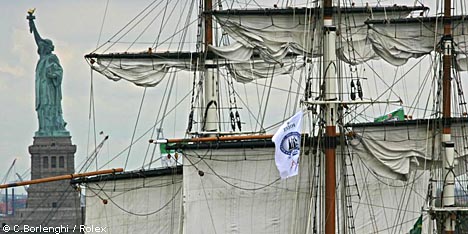 This afternoon, 20 of the world’s largest yachts set sail from New York on the Rolex Transatlantic Challenge, a 3,000 mile ride across the North Atlantic bound for England’s Lizard point in southern Cornwall and ultimately the Needles, Isle of Wight. The Rolex Transatlantic Challenge is the 100th anniversary of the New York Yacht Club’s race for the Kaiser’s Cup, which was won in record Record #sailingrecord breaking style by Wilson Marshall’s Atlantic and America’s Cup America's Cup #AmericasCup legend Charlie Barr, who was at the helm. Just as the 1905 race was delayed by a day due to dense fog in the start area, 100 years later the start also was postponed by one day, on this occasion due to a forecast of potential gale-force headwinds.

With a gray sky and scattered showers over Manhattan, the day began with farewells for the crews as they bade goodbye to family and friends before casting off. Led by Charles Brown and Bill Buckley’s new Grand Prix class yacht Maximus, the fleet paraded in line down the Hudson River, past the wall-to-wall skyscrapers of Manhattan’s financial district and the site of Ground Zero, to the Statue of Liberty, and under the Verrazano Narrows Bridge, marking the entrance to New York Harbour.

By the time the yachts had motored 15 more miles towards Ambrose Light (the top end of the north-south orientated start line), conditions had dramatically changed, revealing a brilliant sun, but light winds : a fluky breeze of 3-5 knots shifting between east and southeast.

In the minutes prior to the Grand Prix class start at 1410 EDT, both the America’s Cup America's Cup #AmericasCup calibre crews on Maximus and Mari-Cha IV had hoisted crewmen aloft to check for any sign of breeze up the course. The New Zealand maxi and Robert Miller’s giant schooner hounded each other down the line as best they could in the light conditions. Meanwhile Joe Dockery’s smaller Carrera started closer to the race committee boat, the pilot ship New Jersey, but with greater pace. Approximately 15 seconds after the gun, all three crossed the line on starboard tack, favoured in the southeast wind.

The most tense start was between the giants in Performance Cruising class 2. Mike Slade’s Leopard of London hit the line perfectly at the Ambrose Light end, while there was near contact at the committee boat end, with Peter Harrison’s Sojana squeezing inside the Swan 112 Anemos and the massive Tiara.

Ten minutes later, for the start of Performance Cruising class 3, Arthur Bugs Baer and William Hubbard III’s classic S&S yacht Tempest was over the line early. "We recalled the boat and advised them and assumed they would continue and accept a penalty, but eventually they turned around and came back," recounted Principal Race Officer John Mendez. "We were a little surprised, because by that time it seemed it wouldn’t be in her favour. The time that they would have to give up - 30 minutes - might be exceeded by their returning." On returning, Tempest once again failed to clear the line and was forced to cross it a third time. In the four class starts, this was the only infringement. The best start in this class was made in the middle of the line by the smallest boat in the fleet, the Swan 70 Stay Calm.

In the final class, the four classics got underway at 1440 EDT. The most stunning image from the start was of the massive square rigger Stad Amsterdam, chartered by the Storm Trysail Club, sailing under her entire spread of canvas, her deck teeming with crew. She showed impressive speed approaching the line but was early, slowed and was unable to recover her pace.

Late in the afternoon, Mari-Cha IV led overall. "The first line-up with Maximus had the two boats performing very similarly with a small speed advantage for Mari-Cha IV," recounted navigator Jef d’Etiveaud. "This is a good feeling for us, as this weather could have given an advantage to the smaller boat. Everyone is concentrating on the boat—there is not a sound. It is a horrendous weather pattern for breaking a record Record #sailingrecord , though.."

Conditions are expected to remain light overnight with the wind backing to the west.

Along the race route, the only mark that must be observed is "Point Alpha." This exists to give the Race Committee the provision to keep the yachts away from any potential ice threat. This year, however, the U.S. National Ice Service and its Canadian equivalent have advised the Race Committee that there is very little threat from ice. Point Alpha has been set at 47 degrees North, 51 degrees West, some 90 miles east-northeast of Newfoundland’s Cape Race, allowing competitors to sail a course close to the great circle route.